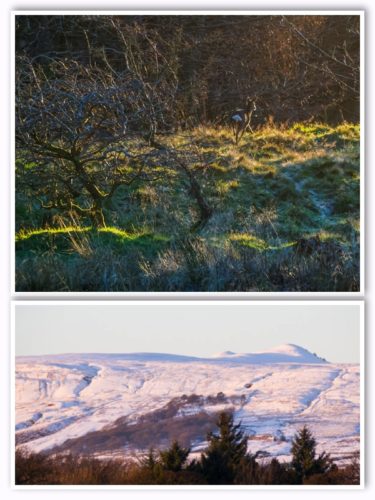 Today I was going for coffee, but not with the usual company.

The Campsie Fells enticed me to do a wee watercolour. It’s the snow that makes the hills so interesting. It smooths the shape, levelling everything out, but at the same time it enhances the ravines that cut their way down the slopes. Thankfully the snow didn’t quite reach us, because although it’s nice to look at, to paint and to photograph, it’s not so great to fight your way through.

By the time it was finished, it was time to drive to the town centre for coffee with Shona and Scamp. Usually I have no problems getting parked in Tesco car park, but today it was chock a block. No room at the inn and non in Tesco car park either. The only solution was to park in the main center car park, across the dual carriageway. I spotted a few spaces in the far away area of the car park and headed there. Then I found the reason for those empty parking spaces. None of the roads or pedestrian areas had been gritted or cleared of snow. Three days of thawing during the day and freezing at night had made the paths un-walkable. Where the snow and ice had melted and re-frozen, the suface was like a sheet of glass. Worse, it was like a sheet of glass with water running over it. Not good for walking on, but the company who own the town centre don’t care. They seem to think that having provided a car park, they don’t need to maintain it as well. Dobbers.

Had coffee with Shona and Scamp then gave Shona run home. I was surprised at the amount of snow still lying where she lives. We have no lying snow and we live only about two miles from Shona.

When I came home, the weather looked good and I reckoned I would manage an hour of decent light, so it was boots on and grab a camera time. The paths here are just as bad as those up at the town centre and the bin that was half full of salt grit last week was now lying empty. It won’t be filled again until next autumn. Saw a couple of deer in the woods of St Mo’s and managed to get a clear shot of one of them. The hills that had impressed me were turning pink as I climbed the mound at the end of the forest. I took a series of shots at varying zoom settings. What you see above was my favourite and became PoD.

Scamp sensibly decided to forego the delights of the choir carol concert tonight as the temperature dropped down to just above zero again. I think that was the right decision.

Tomorrow we may go in to Glasgow in the morning to get the pain over with early!