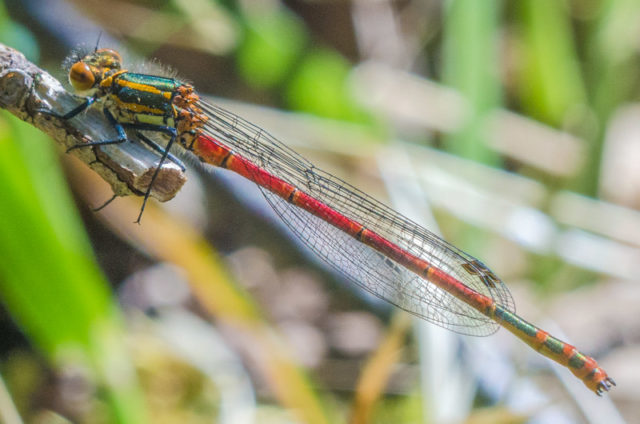 After yesterday’s peregrinations across the breadth of Scotland, we had decided to have a day at home.

While Scamp went out to search for provisions, I made myself a cup of coffee and sat on the front step in the sun.  While I was sitting, I spotted this week’s potential sketch.  It’s just the house across the road.  Nothing special about it, just a corner house with some trees in front and some scrubby bushes.  Sometimes you miss what’s right in front of your face.

After lunch we went our separate ways.  Scamp to cut the grass and plant out some alpines and me to cycle, hoping for a few damselflies to photograph.  It seemed such a lovely day, it was a shame to waste it sitting around on the step or even worse still, moping around the house.

With a couple of squirts of WD 40 on the bike we were ready for the off.  The outward leg was so very easy, I knew it was a bad sign.  It was a tailwind.  The wind was from the east and also stronger than it was in the morning.  That meant it would be a headwind on the way home.  However, after wandering around for a while without any signs of insect life, I caught a few shots of a hoverfly sitting on my bike jacket.  A nice little one, with bright yellow stripes.  Maybe someone on Flickr will ID it for me.  Then I saw a little red damsel.  The first I’ve seen in Scotland this year.  I saw some in Tobago in February, but that’s a different world.  Here we don’t usually see damsels until the end of May or the beginning of June.  Early May is very unusual.  Got a few shots of it, then started to plan them a bit better, trying to get at 90º to its long body to keep as much as possible in sharp focus.  Almost impossible with the extension tubes and the very narrow depth of field.  Still, got a few ‘keepers’.  Nice colour on the body and thorax.

As I predicted, the homeward leg was a struggle with a gusty eastern wind.  Bag was heavy too with a couple of rocks to create perches for the smaller birds in the birdbath.

Dinner was the second attempt at Spanish Rice (just as good as the first.)  While I was making it, Scamp was sunning herself with a Pimms for company in the back garden.  Yes, she did have her sun cream on.

Tomorrow?  Probably dancing in the afternoon, the rest is up for grabs.