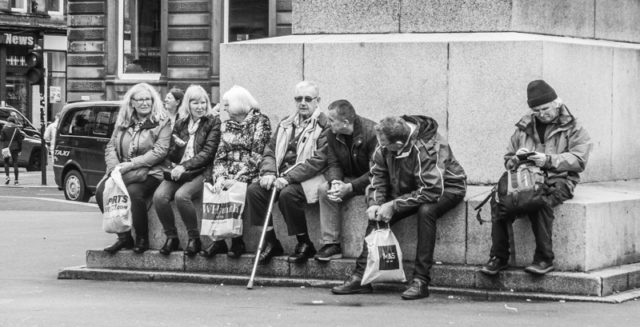 Today being a Wednesday was a dancing day. Drove in to Glasgow through the rain and high winds. Dancing started with Jive and especially the Lindy Hops, the Ladles, the Stepover and the Timesteps. Only the Timesteps set was new. New and demanding for me at least. Scamp, of course breezed through it with little or no problem. Waltz was looking good again with only a few corrections from Michael. In Quickstep we were trying to iron out the problems in the Check and Lock steps. Again, I should rephrase that to I was trying to iron out the problems with those steps. In Tango we were starting to learn a backwards turn. Honestly, ma’ heid wiz buzzin’ by the time we walked out of Blackfriars into a dry Glasgow and we went for a coffee to debrief and discuss progress.

Had a quick look in CassArt for a sketchbook to devote to Inktober 2018 which starts on Monday. One ink sketch per day, throughout the month of October, posted somewhere on-line. Mine usually go on my own Inktober group on Flickr and also on my blog. The group has been created and at present we have one member plus me, but I’m sure we’ll grow.

Scamp volunteered to do dinner tonight so I used the available time to paint another watercolour. This one, like the last two was based on a photograph. The photograph in question was a frame from a TV series about the lochs of Scotland. I think the view I chose was Plockton, but don’t quote me on that. I started painting purely with watercolour i.e. without a pencil outline. However, it became too difficult and there were a lot of perspective lines that needed to be there as a guide to the application of paint, so I set the brushes aside and lifted a pencil. Even after the pencil work had been done and the washes laid in place, it still looked a bit twee. That was when I added some ink lines and suddenly the painting looked a lot better. The pen gave the detail that was needed and the paint gave the colour. A great improvement.

After dinner (Kedgeree) we drove in to Glasgow to dance one class and it was really enjoyable. Nothing too taxing, just a relaxing dance or five! Even with two dancing classes, walking halfway through Glasgow and back, my step counter still says 9,525 steps. Somebody’s short changing me somewhere.

Today’s PoD was taken on the walk back from Blackfriars and its title is The Pensioners Day Out. I felt sorry for the poor wee bloke on the right who wasn’t allowed to join the group. Maybe he’d farted!

No plans for tomorrow. None at all!