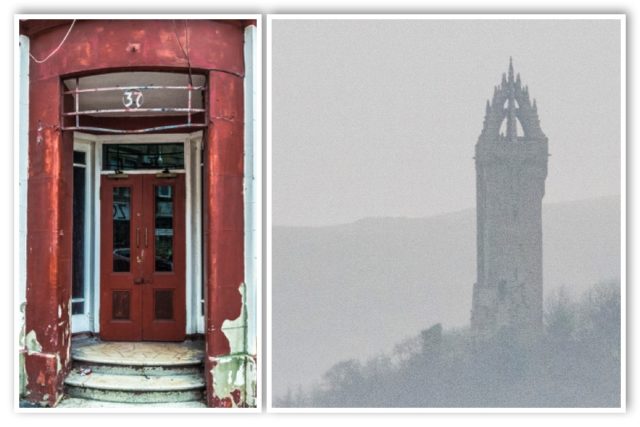 Earlier today:
I’m sitting alone watching and listening to the films of the people’s stories in the Disappearing Glasgow exhibition in the Lighthouse. I’ve just had to shut up a couple of wahoos who were pontificating loudly about the photography round the walls.  I just got madder and madder with them and eventually turned round and called across the room “Excuse me. Do you mind if I listen to this?” That did the trick.  My seven days beard growth and my old battered and torn Bergy jacket probably helped.  They shut up then left … quietly.  They were english, so they didn’t know how to behave.

Later today:
When I eventually rose to leave, about twenty minutes later, there were six other people sitting around me.  I hadn’t noticed them arriving.  They hadn’t said a word throughout the films.  They were Scottish.  Brought up properly.
Definitely an exhibition worth seeing and hearing if you get the chance.

Glasgow was dull today with one of those milky white skies that simply drag you further down.  A January Sky.  No directional light, so no shadows.  I couldn’t see anything I wanted to photograph, so I got the train back home.

Stepped off the train at Croy and realised that it was only just coming up to 2pm.  It seemed a shame to just drive home and stare at a glowing screen for an hour or two, so I decided to travel east in the hope of finding some brighter skies in Stirling and also hoping that Tiso would still be in business there and would have a pair of the excellent Bergy gloves in a small size to fit Scamp, and that is what I did.

I didn’t get the brighter skies, but I did get a couple of photos.  One of the Wallace Monument through the mist and another of a closed down pub.  I also got the gloves.  I considered stopping for a coffee, but then decided I’d rather be on my way home before rush hour, because rush hour on the M9/M80 is a nightmare of drivers changing lanes, changing back, cutting in, cutting out. Just a situation to be avoided, and that is what I did.

I don’t know what we’re doing tomorrow.  The weather fairies say it will be fine with sunshine.