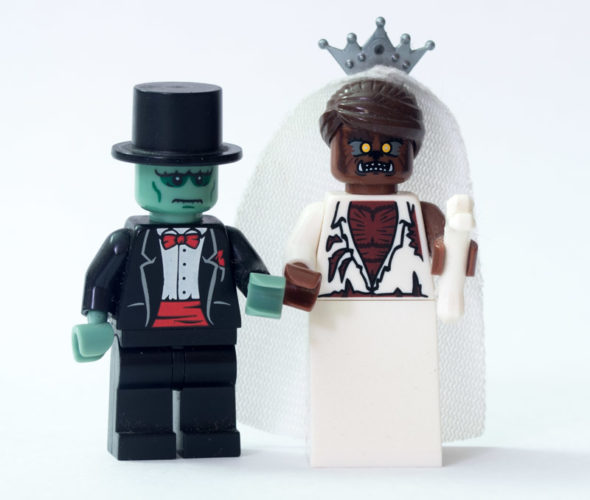 What a dull, dank, dreary day.

It was almost 3pm before I risked leaving the house today. Up until the, it had been damp and dismal (I think that’s me got the ‘d’ alliteration out of my system). Even when I went out, I had to have the lights on in the car. This is such depressing weather, I can imagine how folk get Seasonally Affected Disorder well named by its acronym SAD. I’m glad my painting room has a daylight bulb in it and that the bathroom has daylight LED lights. Brightens up your day more than the weak yellowish sunlight does.

Only went out to get ‘messages’ for dinner. Do you know, I had to unlock the front door because I was the first one to cross the threshold! I wasn’t out long, but when I came back the headlights came on automatically on the car, because it was indeed growing dark.

I had already planned today’s PoD and it worked out quite well, ‘Bride of Frankenstein’. The ability to use the iPhone as a trigger for the camera is a great idea. Very useful for indoor shots. 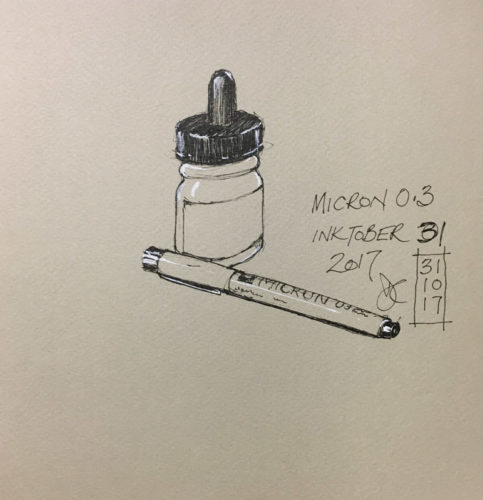 Today’s sketch is the last in Inktober 2017 for obvious reasons. I can’t believe the number of folk who are asking on the Facebook ‘Inktober’ page if they can keep posting there. Eh, the clue is in the name. If you want to post your artwork, and some of it is so amazingly detailed, I think it must be drawn in advance, or nicked from the ‘net, then feel free to create your own page for NovINKber or some such. Me, I’m closing down my Flickr Inktober 2017 group on Friday. That gives the slow-coaches a couple of days to catch up. Today’s sketch is on toned Ingres paper and is of the workhorse of my sketching, the Micron 0.3mm pen and a bottle of white ink which I’ve re-discovered for adding highlights to the toned paper work. If I particularly feel like doing a sketch tomorrow, I’ll do one, but there is no pressure now to keep up with the one-a-day. It was fun last year and it was fun doing ’28 Days Later’ in February, but this year Inktober was a bit of a drag. Feeling burnt out now and looking forward to a rest (and a few early nights too!)

Tomorrow we are expecting more rain, so we may go to the gym.