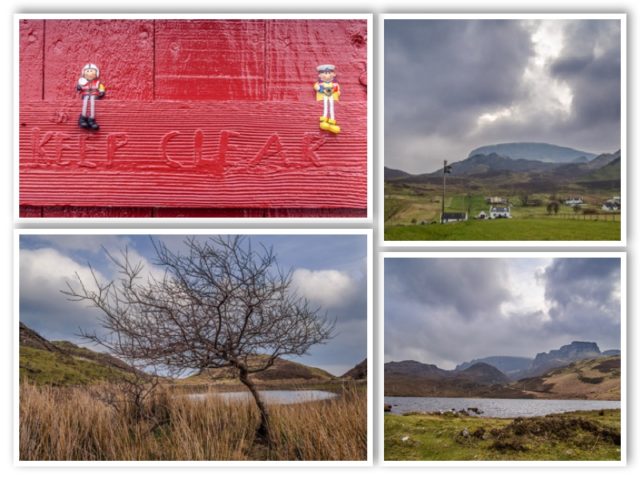 After I opened my birthday prezzies this morning (thank you all!) and had my breakfast, it was time to head out.  My choice of destination.  I chose Broadford and that’s where we went today.  It’s ages since I’ve been to Broadford.  Obviously, we’ve passed through it ever time we come to Skye, but we rarely stop and get out of the car there.  Hazy phoned me just as we stopped and parked.  Had a pleasant talk with her, even if the temperature she was talking about down there was almost twice what we were enduring.  That said, they have the weather, we have the scenery and we were staring out  the windscreen at that sort of scenery.  Out across the water was the pier  and the youth hostel.   But, as Scamp said, no dolphins.  You can’t have everything.

We went for a walk along the shore walk, then down the road before Scamp found a coffee shop where we stopped for a coffee and a scone.  Unfortunately, it was a cheese scone and I ordered it with butter AND JAM.  Apparently, you don’t have jam on a cheese scone.  Coffee was the best I’ve had on the island with the exception of Jackie’s of course.  It was just after I started it, I discovered that I didn’t have my phone.  Oh dear, did I drop it on the walk or did I leave it in the car?  Only one way to find out.  I had to curtail my coffee and go find out.  It was in the car.  Thank you, the birthday fairies who look after lost phones.

Drove back up the road and parked ourselves by the slip to watch the waves and listen to the birds.  Went looking for photos and found that there were even more wee men parked around the boathouse.  I don’t know who is planting them there, but whoever they are, they have a great supply of araldite to weld them to the stone.

Drove Scamp back to the house and dumped the day’s photos on the Mac before venturing out for the last sortie of the week, up again to Loch Gangaig.  On the way there I caught sight of a couple of walkers up on a ridge heading for the Quiraing.  I was cold a couple of thousand feet below them and with the comfort of the car beside me, I’d imagine they were much colder and less comfortable where they were.  Got a few photos of the loch and one or two of the wee lochan I’d visited yesterday.  After that, there was nothing for it but to head back to Burnside for a dram and a plate of Mince ’n’ Tatties.  Superb.  Thank you Jackie.