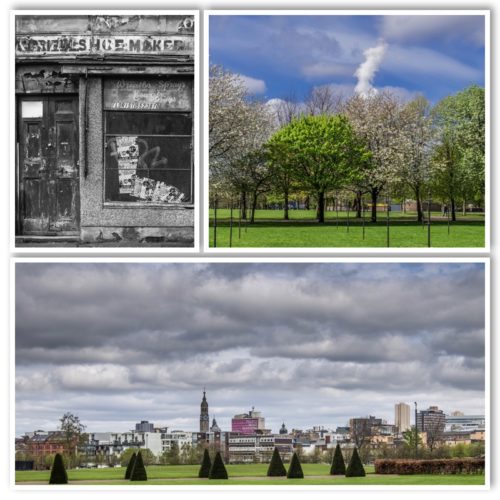 This morning we went for a walk round the Barras.

I was going looking for a cheap Bluetooth 4.0 dongle – it’s a bit of computer hardware, in case you don’t know.  There used to be a multitude of wee computer shops selling legitimate and highly illegal hardware and software down the Barras.  Most Barras stuff was knocked off, one way or another and everybody knew that and accepted the risk that what you were buying was either unlikely to work once you got it home or a man in a black suit wearing a cap with a black and white chequered pattern would relieve you of it as soon as you stepped away from the stall.  No guarantees, no money back, but glorious bargains to be had.  Not today and by the looks of things not ever again.  The Barras was dead.  All the wee shops and some of the bigger ones were closed and firmly shuttered.  Worst of all, there was almost nobody about..  It looks like the end of an era, and also the end of my search for a cheap Bluetooth dongle.

We walked down to Glasgow Green and strolled through the trees just springing into leaf, about a month behind the ones we walked in last week in Astwick.  That’s what happens, they get the weather, we get the scenery.  It’s a fair exchange and I like the way it’s weighted.  We were just heading for the People’s Palace for my usual Sunday roll ’n’ sausage and Scamp’s tea ’n’ toast when three girls passed us and the following snippet of their conversation floated towards me  “… I don’t get hangovers yet. I suppose I will later …”.  I felt like telling her she had to be actually drinking alcohol first.  Merely talking about it won’t have the desired effect, nor will drinking lemonade or coke.  I almost shouted “Try Buckfast.  That should work.”  She was english, which explains everything.  Just one step away from being american.  (Yes, lower case ‘e’ and lower case ‘a’.)

Today’s sketch was from the Wintergarden of the People’s Palace. 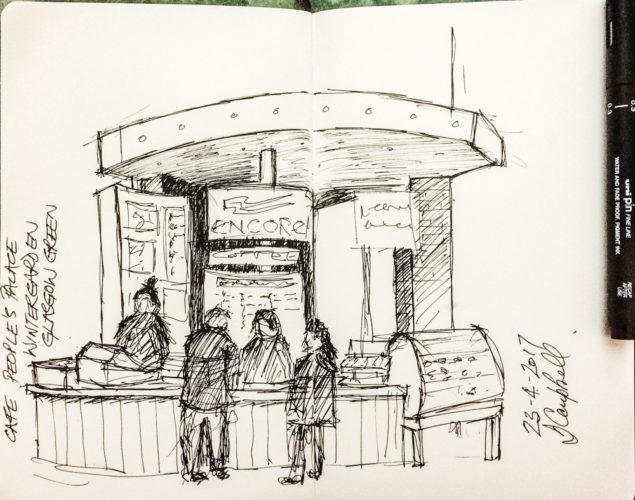 Simpler and more accurate than previous ones IMO, maybe because I was sitting down enjoying my R ’n’ S while I completed it.  The trees were Celtic trees.  Green, White, Green, White, Green.  Must have been planted by a Sellic supporter!  But then, you don’t get many trees with Blue or Red leaves do you?  The mono shot of the old shop with the ‘ghost signs’ was not from the Barras, but from quite near there.

Back home to do a bit of joinery, completing the duckboard for the plants to stand on.  Actually enjoyed it and it looked reasonable when it was finished.  It could maybe do with a lick of paint or stain to finish it off, but the biggest part of the work is done now.  Helped Scamp with a bit of gentle gardening after that, but nothing creative, just labouring really.

Made some bread 50/50 white flour and dark wholegrain flour from Prince Chic’s own farm.  I imagine he planted it himself and then carefully tended it, talking to it daily before harvesting it with a scythe he’d sharpened himself then grinding it carefully in an authentic and architecturally sound windmill.  Lastly he’d transport the flour by horse and cart to Waitrose where we bought it.  He’s that kind of a guy.  The bread was good, thanks Chic.

Tomorrow is Monday so it’s Gems day.  I’ll be making a hasty exit.