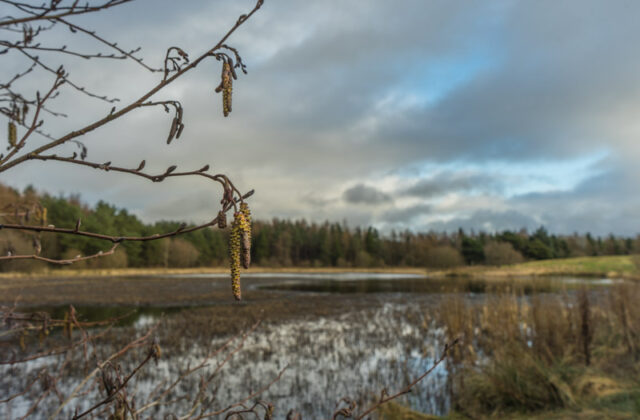 So like mothers all over the UK, Scamp had her breakfast in bed.

I joined her for a while, but I had ’Things To Do’. Things like finishing today’s Sudoku and making the dough for flatbread to have with tonight’s dinner. Things like clearing away the clutter from the back bedroom. All of which gave me no time to think about cleaning the sensor of the Sony A7M2. Anything to stop me from doing it. Luckily, Hazy phoned to wish her mum a happy Mothers Day. She also gave us an update on the new kitchen which appears to be nearing completion.

After the phone call, Scamp decided we should go for a walk. The length of the walk and the destination would depend on whether or not the rain stayed off. I had my doubts that we would get far before that happened and on this occasion I was right. We had hardly got 100 yards before the first drops fell, but we were out now and the destination was set at St Mo’s Park. Probably the shortest walk and definitely the most sensible, after our foray into the wilderness of Palacerigg during the week.

We did a circuit of the pond, saw some geese that were feeding on the grass beside the path which is quite unusual as they normally stay in the pond itself being carefully monitored by the two resident swans. There were two serious looking fishermen with serious looking kit. First time I’ve seen pole fishing being done at the pond. Most people who fish the pond carry the usual kit which is a spinning rod and reel and a selection of spinners, plus the inevitable half bottle of Buckfast. More serious ones bring a seat and an umbrella, a coarse fishing rod and reel with a collection of floats and half a dozen cans of lager. The blokes today were using fishing poles made of fibreglass or more probably carbon fibre, massive things about ten metres long. They had purpose build and chrome plated rod rests too. Most significantly, neither of them had any alcoholic beverages visible about them. Obviously serious, but not ‘real’ fishermen.

We left them to their Sunday morning entertainment and did two circuits of the pond, sheltering under one of the big conifers between circuits when the rain got too heavy. We declared that two rounds of the pond was sufficient and went home for lunch.

<Technospeak>
With the walk and lunch out of the way, there was no excuse. It was time to perform open heart surgery on the Sony. It’s not that I haven’t done this operation before. Anyone who owns a DSLR or a modern mirrorless camera with more than one lens has had problems with dust on the sensor. Called “Dust Bunnies” they are the irritating black spots that appear on photos. It’s not that I have had any serious problems with the cleaning process either. I did make a tiny scratch on the glass once, but it never made a bit of difference to any of my photos. The process is simple. Remove the camera lens. Put a couple of drops of extortionately priced sensor cleaning liquid on an equally extortionately priced sensor swab. Gently wipe the swab across the camera sensor. Flip the swab over and wipe it again in the opposite direction. Put the swab in the bin. With a bit of luck, you’re done. If not, you might need to go through the operation again with another gold dust swab.

I did all that and was happy with the result. Not perfectly clean, because the sensor never remains perfectly clean, there will always be bunnies somewhere and the replicate at an alarming rate, especially when you change lenses a lot, like I do. Maybe that’s why they’re called ‘bunnies’!
</Technospeak>

I was doing dinner tonight, but it was a simple Holy Cow curry. Simplest curries I’ve ever made. I commend them to you. I also made flat bread to go with it. Scamp did dessert which was meringue nests with tinned apricots. Tastes much better than it sounds.

Dance class tonight was checking on our Waltz and Rumba then Tango. Only about seven or eight steps, but so much to remember, like bend your knees, turn your feet out, tuck your right foot into your left instep. It seemed such a performance for half a dozen or so steps, but it did feel more like a performance than either rumba or waltz did. This was a whole new ball game.

PoD was a photo of catkins over St Mo’s. I took it after I’d done the open heart surgery on the Sony. Just to test that most of the bunnies had gone and that it’s little heart wasn’t broken. If that means nothing to you, it’s because you skipped the interesting Technospeak section!

No plans for tomorrow yet because we have a Tesco order coming some time in the afternoon.