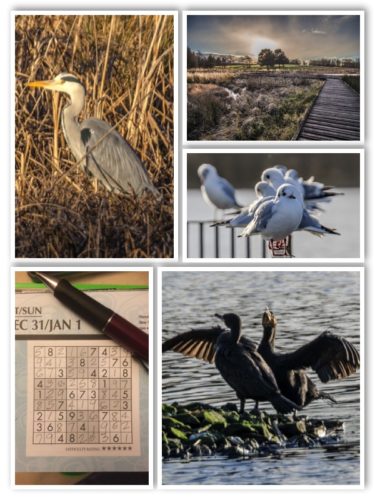 Ne’erday to Scots, New Year’s Day to the rest of the world.

Made some bread in the morning and left it to rise while we went for our traditional walk around Broadwood Loch.  It was a bright morning and the sun was quite blinding, reflecting on the water of the loch.  Got some photos of the gulls sitting on the fence at the outfall of the loch.  We used to call them seagulls when I was young, but these birds have never seen the sea, far less paddled in it.  The furthest they get is foraging in the various landfills around the country.

Further around I got some shots of cormorants stretching their wings to dry.  It appears that these birds have also rejected the maritime life for the more sheltered inland waters.

Lots of people taking the opportunity of getting out in the sun, even if it was cold like today.  Allegedly 5ºc, but a cold 5º.  There was a bit of a breeze which probably made it feel even colder.  However, when you’re walking and talking you don’t feel the cold so much.

When I looked at the photos once we got back, I wasn’t impressed, so I grabbed my camera and headed out again, alone this time, to St Mo’s.  Scamp was more interested in watching the ballet on telly.  Got some landscapes taken with the Oly 5 and some more burds had their photo taken with the Nikon.  I managed just over an hour out before the light started to fade, but at least I got some better shots this time.

May go out somewhere tomorrow, maybe not.  It depends on the weather.