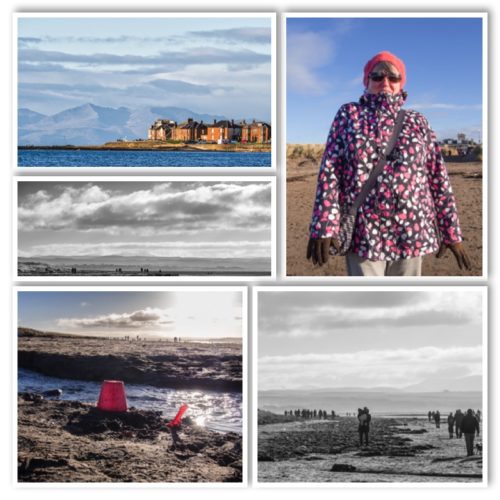 Out before 10.30 this morning because although it was two degrees below zero, the sun was shining and the sky was fairly clear, so it would have been a shame to waste such a beautiful morning.

We pointed the car towards the west and drove down to Troon.  Probably Scamp’s favourite place in all the world or at least very nearly the favourite.  The drive down was great and I saw some beautiful photos just waiting to be taken.  Unfortunately, when you’re on a dual carriageway travelling at just under 70mph, you can’t just stop instantly, jump out and grab the shot then jump back in the car.  You have to give some consideration to other road users and the laws of physics.  What you can do is record them on your inner camera and remember the place, time and weather conditions, then hope you can replicate them when you have more time to stop and look.  If not, you’ve always got that inner record to look at in your mind’s eye.  The best thing about the inner image is, it’s perfect.  No intrusive grain, no camera shake, not photobombers.  Everything is just perfect.

When we got to Troon, I think we got the last space in the carpark.  Temperature was now on the positive side of zero, but not by much.  We took a walk along the front, heading south, wrapped up for the cold, but wearing sunglasses to avoid the bright sun. About halfway along we bumped into my old boss with his wife and son.  ‘Old’ as in the sense of ‘from some years ago’, because he is much younger than me.  Almost the same age as you JIC!  We talked for a while before his son wanted to be getting away on his scooter.  We had to scoot too, because it was cold just standing.  At the end of the path we walked onto the sand and continued out past where the kite surfers are usually to be found.  There were none today, I suppose because there wasn’t enough wind for them. After a while we turned round and although the sun was now at our backs, the wind was in our faces.  You can’t win sometimes.

We walked back into town and thought about going to the Lido for lunch, but it looked quite busy, so Scamp suggested we have a coffee in a wee cafe round the corner.  The Venice cafe was busy too, but we managed to grab a booth while another family were dithering about deciding if they was enough space for them.  He who hesitates is lost.  We won.  Lunch was a roll ’n’ scrambled egg for Scamp and a roll ’n’ flat sausage for me and two of the best coffees I’ve had outside of our house.  I’ve a good mind to get a business card from the Venice and hand it to the owner of the cafe in Callander and say “That’s how you make coffee mate!”

After that, it was back up the road with a stop to get tomorrow’s dinner from Morrison’s.

Tomorrow?  Scamp’s sister’s coming for dinner and before that it’s coffee with Fred for me.  Sorted.