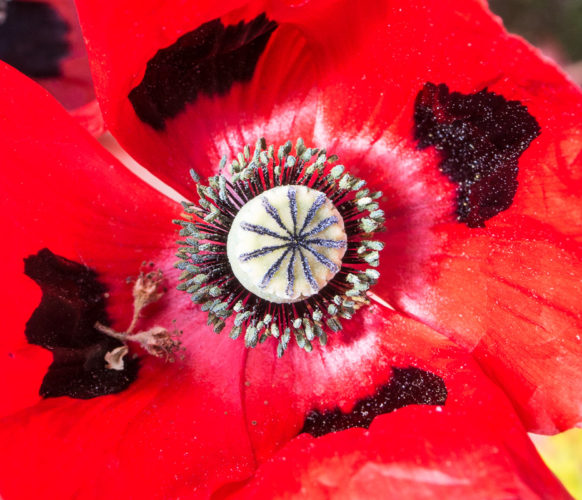 Slugs and snails beware. The end is nigh.

A package dropped through the letterbox today and in it were two boxes of Nematodes. One to treat the garden and hopefully eradicate the slug infestation and another to do the same for vine weevil. I’m not sure we have vine weevil, but I suspect we have and I know for certain that we have more than our fair share of slugs. I don’t really mind the shell carrying snails, but I hate slugs. The instructions on the box said to keep them in the fridge. I said no thanks and put them outside in the bin that holds the fertiliser and compost bags.

I took some photos of the Ladybird Poppies, macro, of course, and it was one of those that became PoD. Also on the agenda for today was putting up a frame for the peas. I’d bought the wood yesterday and also some woodscrews. It’s a pain having to buy these things, but like I said yesterday, I don’t have access to these materials and consumables any more! The frame wasn’t too difficult to erect and screw in place. The netting was a bit more of a faff, getting it stretched across the frame and clipped in place with staples and cable ties. Even after all this work, the bloody minded pea plants wouldn’t hang on to the netting. The ungrateful things just hung there for a minute or so and then dropped back to the ground. After a bit of delicate weaving of the tendrils, they eventually got the idea. I think I must have planted dim peas.

<Technospeak>
I spent the afternoon clicking and typing away at the new Win10 machine, trying to get it to create a macro to allow me to log on to my blog. I can do it on the Mac using a macro created with Keyboard Maestro, but there’s nothing like that app in WindowsWorld. You have to resort to some cryptic code in AutoHotKey to get anything like the same result. I finally managed to adapt a piece of code I found on an internet forum, but it only works with Internet Explorer. It’ll be another afternoon of swearing before I can get it to do the same on Firefox. Finally when I shut down the PC it wanted to do an upgrade. Now is that different from an update? Who knows. Maybe when I switch on the computer today everything will be different. I doubt it.
</Technospeak>

A walk across St Mo’s later cleared my head and gave me some photos of dragonflies and also a couple of coots feeding their scraggy little red headed young.  A cool breeze at times, but still a beautiful day.

After dinner it was time to deal with the pesky slugs. Dissolved the contents of the nematode packet in a 5 litre bucket of water and stirred frantically. Removed 500ml (ish) into the watering can and diluted it to 5 litres of slug nemesis. Tried to water it over the raised bed with the rose, but found that the rose was too fine. Had to remove it and just pour it on. Repeated this round the plants and pots in the garden until the bucket was empty. I should have watered it in later, but it was getting a bit cool, so we left it to nature, it’s supposed to rain tonight.

Tomorrow we may go to Stirling to look for cheap trainers for me and lunch for us.