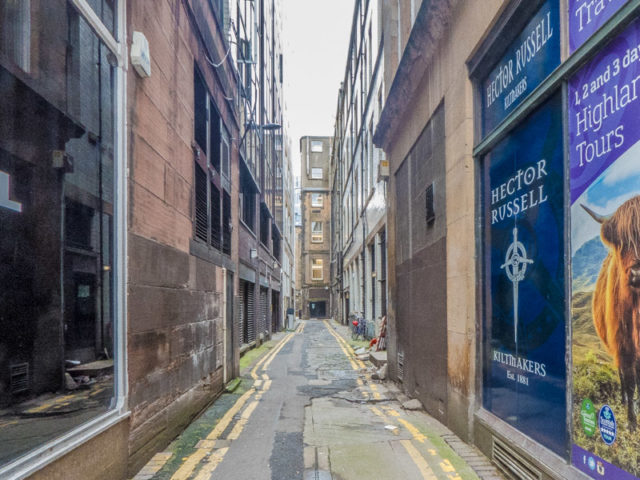 Scamp was meeting the other witches for lunch. I was off the leash for the day.

We drove in to Glasgow together as I was heading there anyway, then we went our own way, except that when I was leaving John Lewis after perusing the ‘bargains’, who should I bump into but Scamp. We agreed to go our separate ways again. Later when I was going in to the art shot, there she was again, but this time she had the other three witches with her. Luckily she directed them into a bar for cocktails, so I was saved the ignominy of having to hide from four women. Thank you again Scamp. 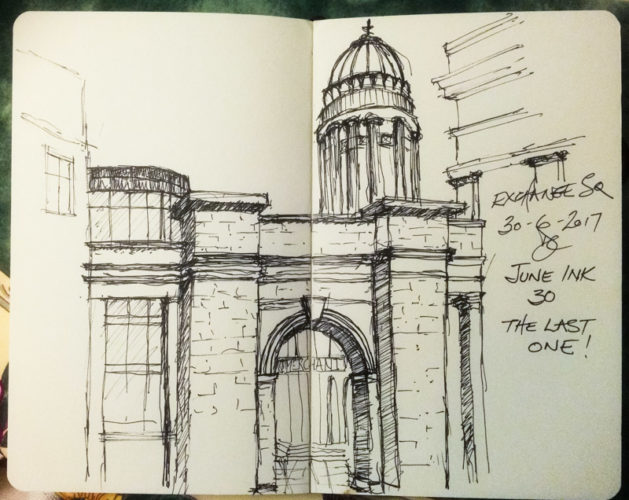 I bought myself two sketchbooks in Cass Art. I don’t like shopping there, but they are the cheapest in town. The next thing to do was get some photos and a sketch. The first would be easier than the last. It usually is. I got the photo in Buchanan Street it was just an empty alley. I think it’s the emptiness and the perspective I like about these alley shots. The sketch was next and that was done at the entrance to Exchange Square, or Royal Exchange Square to give it its proper name. That’s June Ink or J’ Ink over for another year. Bring on the July challenge whatever it is.

Drove home and had lunch, then went out for a walk along the railway, hoping to get some more pictures. Unfortunately, the light was pretty low and I didn’t get much. Took about fifteen shots of a hoverfly and none of them were sharp. Ten of a ladybird and none of them were sharp. Sometimes it doesn’t matter how many shots you take or what equipment you have, it just doesn’t work out for you. You just have to accept it and move on. Tomorrow will be better.

Tomorrow may be better, but it WILL be raining again.  The weather fairies predicted it.