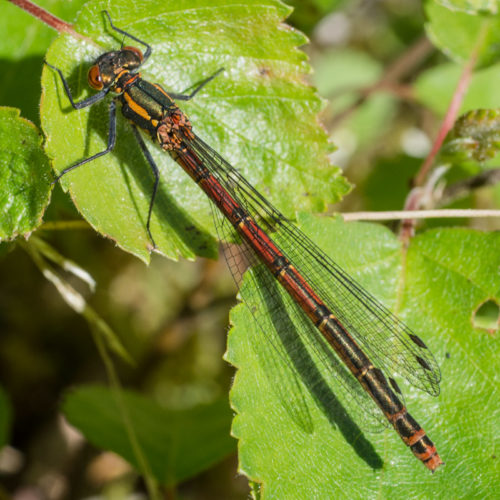 This wasn’t a day for lying around in bed, but we did, although not for long.

The strawberry plant in the hanging basket needed splitting up and repotting. So that was my gardening task for the day. It didn’t really take me that long, especially with the new garden table to raise things up so I wasn’t bending all the time. After splitting the original plant I had enough to fill two hanging baskets with some to spare, so that’s what I did. After that, it was wearing on to lunchtime, so we rested our trowels and forks for a while and had lunch. Watched an irritating interview on the Andrew Marr program with the despicable Nigel Farage (Who my spellchecker thinks is Nigel Garage. He has as much sincerity as a Garage). He’d make a great snake oil salesman.

I could have done a lot of things, but I eventually decided that the bike needed a run, so I dragged myself out in the warm sunshine and cycled to the spot where I can usually depend on seeing some damselflies in the summer. It’s the verge of a fair sized pond, but today it was a reed bed with little sign of any standing water. It just shows how little rain we’ve had this year. Occasionally great deluges lasting days, then nothing for the next week. Is this another sign of Global Warming? Something else that the esteemed Mr Farage doesn’t believe in. Trained by Trump perhaps? I was about to leave empty handed when I remembered another very small pond where the damselflies hang out and lo and behold there was a Large Red Damselfly (Pyrrhosoma nymphula). Got a few shots of it as it sunned itself and that made PoD.

Back home it was lamb shank for me and salmon for Scamp. Both done in the oven. The lamb shank was enormous and made great eating. Scamp’s salmon looked good too. As a surprise she’d made meringues. Light as a feather they were. There are some kept aside for tomorrow, but they are at their best straight from the oven. 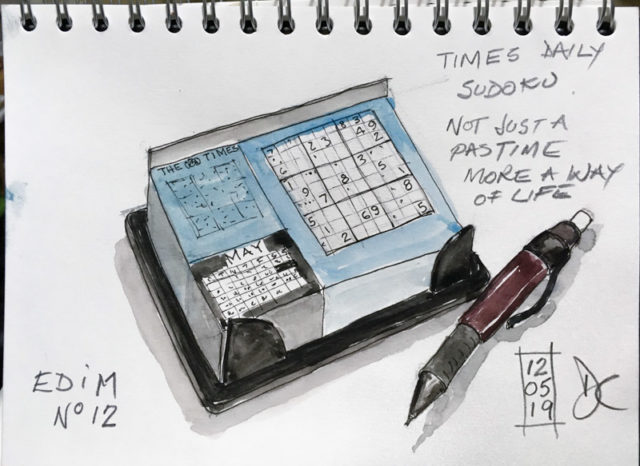 Watched a boring Spanish GP before I started on today’s sketch whose topic was “Pastimes / Amusements”. My answer was “The Times Daily Sudoku” which passes a significant part of my time but is rarely amusing.

Tomorrow I’m going to lunch with Shona and she’s paying.