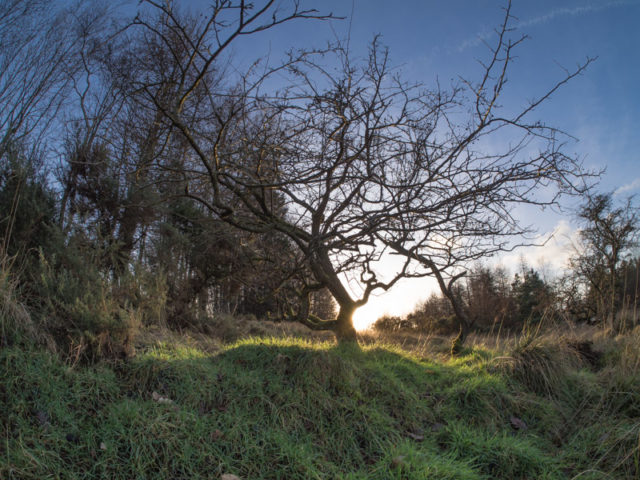 So, should we got to Glasgow? Should we go to Stirling? Maybe neither.

Instead of these two destinations we chose Cumbersheugh. To be exact, we went to Milano and Scamp was driving. Scamp had a massive bowl of mussels well coated in tomato and garlic. I had a pizza with Italian sausage. With Scamp driving, I could even indulge myself with a glass of wine while Scamp had the soda water and lime. After a delicious lunch (no sarcasm for once) we drove to Tesco for milk and walked out with three bags of various provisions, and the milk.

Once we got parked again and deposited the food, I took a couple of cameras for a walk in St Mo’s because we still had sunshine and blue skies. I found an interesting shot of the hawthorn bush you see at the top of the page. For once it didn’t take a lot of work to get a decent image out of it.

When I came home from St Mo’s tonight I drilled a small hole in the plasterboard wall in the back bedroom and dropped some poison mixed with sugar into the cavity. Let’s hope a spoonful of sugar will help the medicine go down. Murdo’s suggestion. Apparently the sugar entices the rodents to take the poison. We’ll see. Later I spoke to the woman next door at 36 and she has the same problems as us. She has the “Rat Man” coming to visit on the 3rd January and will direct him to us when he is done. Val says he had the same problem years ago and the only way he got satisfaction was to get everyone on the block to keep at the council until the problem was solved. That’s what we’ll have to do to.

Tonight we had our ‘essential’ Churros from my Boxing Day walk. Despite being a little less crunchy than ‘real’ churros, they were very tasty. Now watching “Guys and Dolls” and drinking Black Rum ’n’ Cokes. One each.

No plans for tomorrow. We’ll take it as it comes.