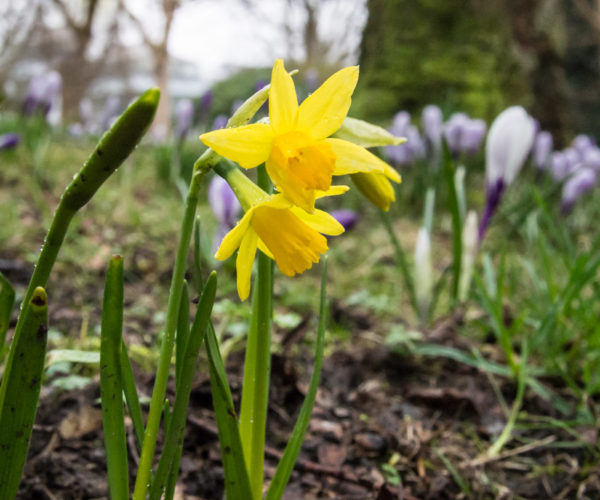 We were swithering whether to go east or west today.

The options were Beecraigs Park near Linlithgow or Glasgow’s west end. The park would be good for a walk and also east looked more settled than west as far as weather goes. Glasgow’s west end had the benefit of the Botanic Gardens and Paesano pizzas. Pizza won. Lovely spring sunshine as we were driving in to Glasgow, so maybe the weather fairies were wrong for once.

Accident on the M8 led to the motorway being closed, but we weren’t going far along, so we risked it and we got off before everything ground to a halt. Parked at Cowcaddens and took the subway out to Kelvinbridge and walked to Paesano which was queued out the door. However, we were seated within the ten minutes the server predicted.

When we left I was sure I could feel a spit of rain, Scamp wasn’t so sure. A hundred metres up the road she was sure. By the time we’d walked up to the Botanics it was proper rain. We took a walk around the Kibble Palace which was full of weans screaming and running round the circular paths, past prehistoric looking tree ferns and bird of paradise flowers. It’s a place that’s much better to visit on weekdays.

Outside the rain had almost stopped, but when we walked up to see how the gardens were growing, we realised it was just waiting its time to ambush us again. After that it just got heavier. I managed to grab one shot of tiny little daffodils about the size of the crocuses they were planted round. I know it really should be ’croci’, but that sounds so academic, so crocuses they will be today. Raided Waitrose for tomorrow’s dinner and other stuff and got the subway back to the carpark, then drove home. Maybe we should have gone to Beecraigs, but it wasn’t an altogether bad day. Pizza was good, but not as good as the company!

Today’s PoD is the little daffys and today’s sketch is of a woman I listened to back in January. She was singing Tracy Chapman songs and playing guitar on Sauchiehall Street in Glasgow. The painting is from a photograph I took that day. I don’t like painting from photos, but needs must.

Listening to the Life in the Dark album by The Felice Brothers while typing this.

Tomorrow, hopefully we will be dancing at Mango.