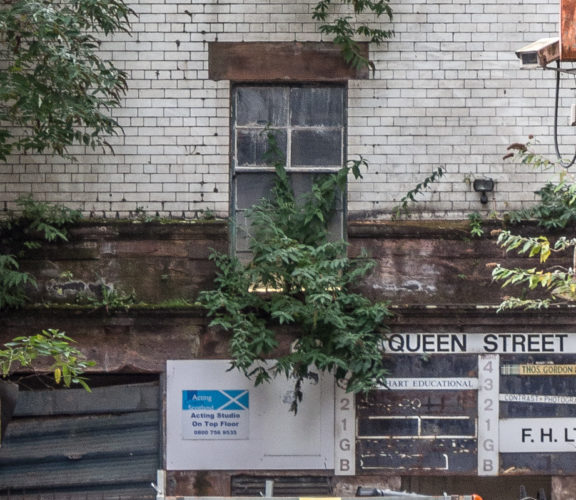 We took the bus in to the town today and then went our different ways for an hour and a half.  Me to do my sketch of the day and Scamp to wander round the shops.  Yesterday I had a bit of a hiding place, ensconced beside a wall in 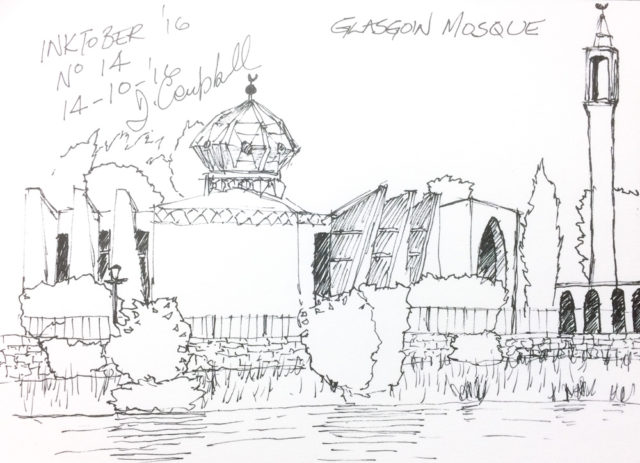 the church yard of the old church, you could even say I was hiding, but today was drawing in the middle of Glasgow.  No walls, no church yards to hide behind, just me, a sketch book and about half a dozen pens.  I got some strange looks, but nobody stopped to ask what I was doing, which was a great relief.  I suppose I did have one hiding place, one wall, the wall and hiding place of Inktober which I guess I could use as an explanation for sketching in the open air in Glasgow.  Either that or a daft auld bastard with too much time on his hands.  Yes, that would work too.  Sketch wasn’t as good as I had hoped it would be, but I’ll keep trying.  Another sketching day beckons tomorrow.

Today’s photo is of a wee lane just off Queen Street.  I think it unlikely that Nicola had ever seen this lane, let alone stayed in it.  Such is the hyperbole in Glasgow at the moment.  I’ve taken this shot before, but this is a different crop to remove the two windows above this one and exaggerate the squalor of Queen Nicola’s Lane.

Lunch, when we met up again, was at Paesano Pizza in Miller Street again.  Excellent pizzas.  When we left there, the rain was on.  Up until then it had been dry and fairly bright.  Like I said at the start, we’d travelled on the bus today and on the road home I was pleased that we had.  Traffic was backed up and hardly moving as we crossed the bridge where I would have been exiting the M80.  I’d have been caught up in at least three miles of standing traffic.  Not a good way to end the day.  In addition, I had the opportunity to have a glass of wine with my pizza.  You can’t risk that if you’re driving these days.