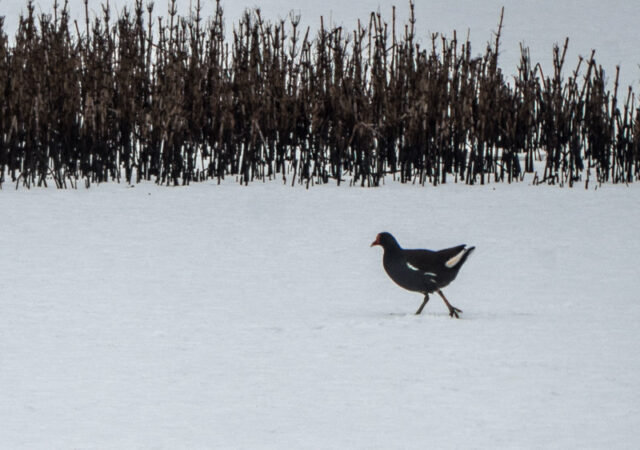 A year we won’t forget, although most of us will wish we could.

It was snowing when I was making breakfast and it continued to show well into the afternoon. I finally put on my boots and snow gaiters and went for a walk in a sort of sleety drizzle over to St Mo’s and found my PoD. Not taken with the fancy Sony, but with my old Teazer TZ70 which is clean for now after being hoovered out a year or so ago and left to recover from that shock. It’s now much cleaner than it’s replacement, the the TZ90 that is a dust magnet. Anyway, PoD was a moorhen striding out across the snow on the frozen St Mo’s pond. Almost, but not quite black & white. A couple of circuits of the pond told me that there were no other animals or birds looking to be models for me, so I headed home.

It’s traditional to do a bit of tidying up on Hogmanay and as I said last night, I booked myself in to clean the kitchen cupboards, just the outsides, of course. Heavens, it would take a week to clean the outsides AND the insides. I’d like to say it wasn’t such a terrible task. I’d like to say that, but the truth is it was just as bad as I expected. I think we may have to reduce the amount of frying we do, especially deep fat frying. It’s not until you try to clean a cooker hood that you realise just how sticky everything becomes. However, it’s done now and the kitchen looks better for it.

I think Scamp may be coming down with the cold that I thought I had yesterday. Strangely I feel much better today and now she sounds like I did. Let’s hope she recovers as quickly as I did.

Dinner tonight was paella made in the new pan. It worked, but only just. Not the best pan for cooking a rice dish. All those little rice granules get caught in the same ribs that make steaks or chicken breasts taste great.
Note to self: Horses for Courses.
Paella may have been a miss, but the Viennese Shortbread, Scamp made was melt in the mouth. Lots more in a Lock ’n’ Lock box for tomorrow.

Temperature is a positive 3.7ºc now and the snow is still melting. If it freezes later in the night the roads will be a mess. I’m just glad I’m not having to drive. I couldn’t tell you the last time our respective cars turned a wheel. There’s just been no point, so they’ve been parked up for ages. Must make the effort in the new year, i.e. from tomorrow.

No real plans for tomorrow. We’ll probably stay up for “The Bells” tonight, have a dram or a gin and go to bed.

Looking back is what we do on this day, but this isn’t a year I want to look back on. Restrictions, Lockdowns and disappointments marred a terrible year. We can only hope that next year will be everything this year hasn’t been.

I think that’s my wish for 2021. I hope all my readers have a happy and a healthy New Year. Let’s keep looking forward, not looking back.