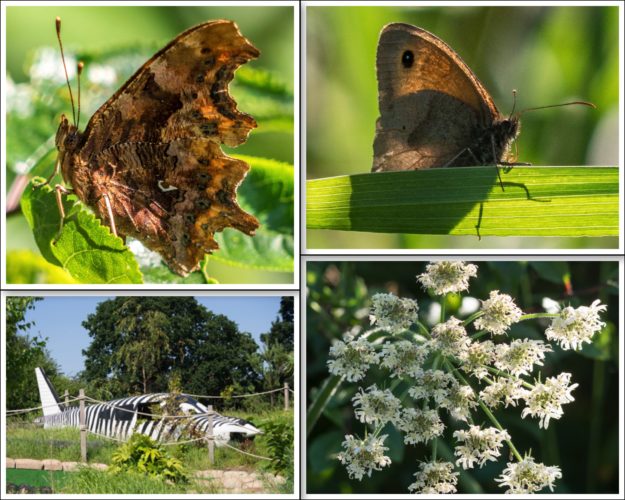 Yesterday was hot, but today, oh today was even hotter.  Over 33ºc in some places.  Heavens, even Scotland had over 25ºc.  What is the world coming to?

Scamp had decided that she was going to sit in the garden all day.  A sensible decision given that the sun was going mad.  We sat in the garden for a while watching movement in the pond.  We couldn’t decide whether it was frogs or newts.  We settled on ‘Frewts’ as the most likely suspects.

After lunch we went for a walk along past the golf course and had a couple of drinks at the clubhouse.  It doesn’t seem as if you have to be a member, just as long as you’ve got money.  We had money and I sampled another of these English IPAs which are very nice.

After we got back, Scamp went for more sunbathing in the garden while I went back to the wild woods to try to photograph some butterflies.  I managed to get a Small Heath and a Comma.  We don’t get Commas in Scotland, but apparently they are moving further north as a result of global warming.  I saw a deer, but it was too fast for me and was away into the tall grass before I could get the camera ready.  Also saw the pale blue dragonfly that I saw earlier in the week, but again, it wasn’t landing, just cruising, looking for a mate.

Canute and Delia came over for dinner which was an Indian take-away.  Very entertaining evening.  Just hope I can get to sleep in this really hot night.