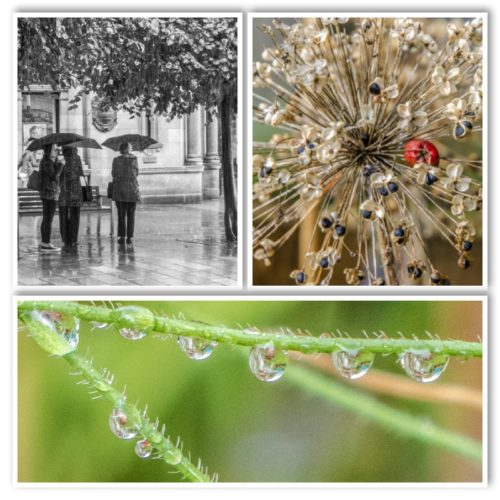 Today we were on a tight schedule. I wanted to get a pair of jeans in Glasgow and we both wanted to go to a flower show on the way back. Also, if we could find time in the middle to have lunch that would be a bonus!

Drove to Glasgow. When we emerged from the car park everyone was huddled round the door, because it was raining – such an unusual event in Scotland. However, after we walked down Buchanan Street in the gradually increasing deluge, we too took shelter in a shop doorway and I got the photo of the three ladies who chose an arboreal shelter instead.

Went in to St Enoch’s Centre to get out of the rain and use it as a short cut to Debenhams, and it was there I came upon The Unexpected Artist gallery. There were two artists on site. One wee bauchle singing away to himself while he painted in the corner and a tall thin woman with tattoos all down her neck, painting a portrait. Some of the work on show was very good, some was not all that great. Certainly worth another look though. Got the jeans and almost dodged the rain going for lunch in Charcoals. The food was great, but it was a bit spicy. I didn’t mind, but Scamp was sure there was steam coming out of her ears. A slight exaggeration, but there was a fair bit of heat in the Chicken Rogan Josh. No opportunity of a beer on the way home as I was driving, but at least the rain was easing off by then.

Got to Muirhead for the garden show and met the other Mr Campbell (no relation) and discussed retirement then exchanged news. Bemoaned the poor weather this year and discussed holidays past and still to come. Took our leave and left before the prize giving. Such a dull affair with too many in jokes.

Sort of intended going out to get some photos, but finally decided that I had enough. I’d taken the shots of the drips on the poppy stems this morning and grabbed one or two of the rowan berry on the allium, but it was the ladies in the rain that was my PoD.  What I did do was an attempted copy of Fred’s painting.  His looks better, the colour in mine is too muddy.  I’ll attempt version 2 tomorrow.

Hoping for the dry weather that appeared tonight to stay tomorrow, because Monday looks like more rain.  Not unexpected at all.