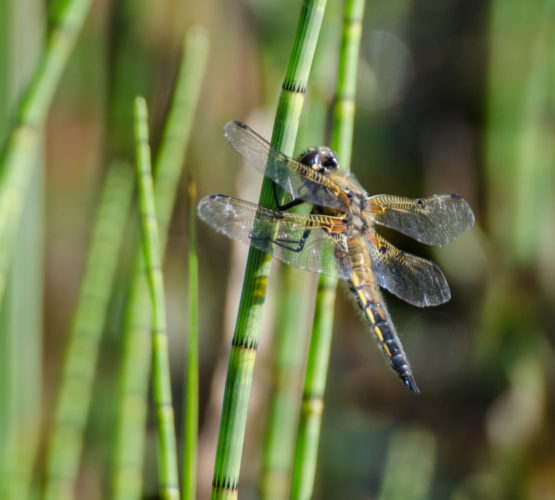 That didn’t mean that we were doing much more than getting up, but it was a start.

We finally chose to go for a walk after Scamp had spoken to her wee sister and told her she’s been talking to her big sister yesterday. Also after I’d hung out most of the washing. It was much cooler and much breezier than yesterday with the wind coming from the east. We walked round St Mo’s and then paused for fifteen to twenty minutes watching half a dozen dragonflies, not damselflies, big dragonflies clattering about the wee pond. Some were obviously females, busy egg laying and some were males chasing off the competition, but they all combined to show off their aerial skills as they flew round and between the various obstructions in their path, which included us. Utterly fascinating and perfect for taking you out of yourself and the problems of this new world we are living in.

Back home and time for a Sunday lunch of eggs, black pudding, beef-ham, sausage and tattie scones, all fried. It’s ok to eat healthy six days of the week but on the seventh you can fry your food.

We knew the good weather wasn’t going to last, so Scamp 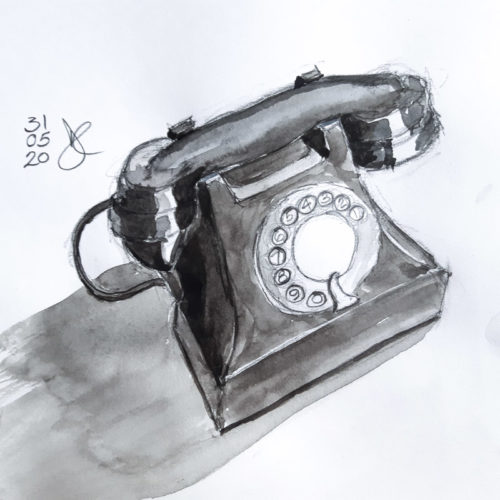 made the most of it. She slapped on the Factor 50 and took herself and her book out into the garden to soak up some rays. I adjourned to the ‘Painting Room’ to sketch today’s drawing which was ‘A Phone’. My choice was an old black bakelite rotary dial phone. They have so much more soul than the black glass slabs we use for everything from sending messages to photographing everything and occasionally even speaking to people. The old black bakelite phones were used for speaking to people and nothing else. I got the basic shape drawn and photographed, then put some black watercolour on it to give some tonal gradation. Happy with the result, I went out for a walk with the ‘big dog’ to see if the dragons had calmed down.

Thankfully they had calmed down and I did get a handful of decent shots, but only after rejecting a bucket load of junk. Today’s PoD was one of the best. It’s a Four Spotted Chaser and it was resting after a strenuous morning.

Got back just in time for dinner to be served. It was Neil-D’s lovely summer style rice and chicken with a variety of veg and condiments. Avocado as starter and Churros as a dessert. A nice bottle of Malbec to wash it down and then a seat outside to watch the sun go down. That’s what the last day of metrological spring is made for.

I watered the back garden afterwards while Scamp fed the front garden plants with some seaweed fertiliser. Coffee to finish off, with a drop of alcohol to take the edge off it.

Not a bad day, all in all. Hopefully we’ll manage one more day of this early heat before the rain comes in the middle of the week. May go and see a man about a bike wheel tomorrow.