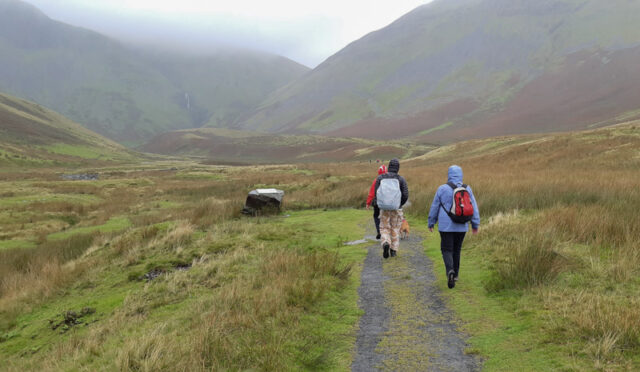 We climbed halfway up a mountain today to see a waterfall.

Not your typical Sunday morning. Sat upstairs in the lounge willing the weather to improve for our second walk of the week. This one to Caultney Spout which is an impressive waterfall. JIC drove us to the parking place and we decanted into the rain. Crossed a narrow footbridge over a river. JIC and I noted the carcass of a deer, we think, impaled on a tree branch,just upstream from the bridge. Note to self: Don’t drink any of the water in this stream today.

Once across the bridge we turned face on to the wind and the rain and plodded onward along the path, passing other walkers going the other way. Probably they had already climbed the mountain and were on their way to the next. They all looked happy, cheerful hikers in their cagoules and shorts. Shorts? In weather like this? You have to be hardy to play that game. We trudged on. Then I found that the Teazer had mysteriously managed to extend its lens. Even worse, it wouldn’t shut down. Finally got it to behave, but the battery level was showing nearly empty. What it had been doing in my pocket all the time, I have no idea. Never mind, I still had the Oly 1.

Further on and the wind and rain were lessening. At first I thought (hoped) the weather was improving, but we were just entering the lee of another hill and that was sheltering us. It was round about then the Oly 1’s screen went black. Switched off and on again, but still nothing. Removed the battery and pushed it back into place and got the message to set the date and time, not a good sign. Set them and all seemed well, full three bars on the power icon.

The path became steeper and wetter after that. We also had to cross a few streams. As the slope increased even more, Scamp suggested that the other two (plus Vixen) go on as we were just holding them back. They pointed out where they were going and we just nodded. Were those orange and red dots really people? Apparently they were. We let them go on, leaving us the opportunity to take our time. The Oly turned off again. This time I plugged in a replacement battery, reset date and time and it was operational again. Thankfully it remained working for the rest of the walk.

We could see that Sim and JIC were on their way back down again led by the four wheel drive of Vixen. The rest of the walk was uneventful and we were soon on our way back home after turning at the Cross Keys which is a Temperance Inn. A real one. No alcohol served, not that we were bothered, we were heading home for lunch. Got stuck behind a tractor travelling at a sedate 20mph for mile after mile on twisty turny roads with lots of traffic coming the other way. No chance to overtake, but the patient JIC took it in his stride, but we all breathed a sigh of relief when it turned off into a housing estate.

Tonight’s dinner was cooked by JIC and Sim and was Bacon and Borlotti Beans. After dinner we watched the New Monkey Magic. Not a patch on the original.