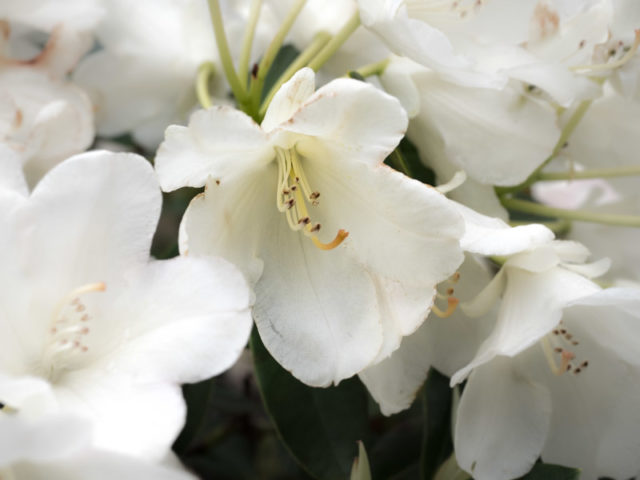 That about summed it up. Windy and Wet.

Parcelled up some fabric to post to my cousin’s granddaughter to make some masks. Pretty Mickey Mouse fabric. There’s no sense in making boring masks when you can make ones that will make someone else smile. Good idea Gemma.

Had to wait outside the post office in the rain while some ‘zoomer’ had a long conversation with the woman behind the counter I thought the bloke in front of me was going to hook him (in a suitably Socially Distanced way, of course). When the zoomer came out the whole queue gave a great sigh of relief.

That was about the highlight of the day. No gardening was possible due to the wind and rain. We just stayed in. Well, I did sneak out during a dry spell to grab today’s PoD which should have been a blurred shot of the rhododendrons blowing in the gale force wind, but none of the shots were deemed worthwhile, so a static one had to fill the bill.

Dinner for me was a mince pie. Not like a mutton pie or a scotch pie, but a pie made with puff pastry and mince. A real mince pie like my mum made. Scamp talked me through the making of it one more time. I think I’ve got in in the grey cells now. 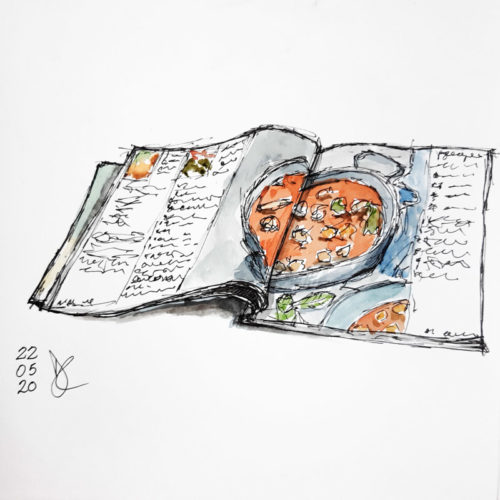 Tonight’s sketch was to be A Book, a Newspaper or a Magazine. I chose Magazine, because I don’t read fairy stories, so the newspaper was out. A book is basically a rectangular prism, but a magazine can be folded and when it’s opened out it’s got curves and little shadow areas. This is a food magazine, so although, unlike oranges, you can’t eat it, you can eat the things it teaches you to make. That’s good enough for me.

Hopefully the wind will calm down tomorrow and we’ll get out for our daily exercise.