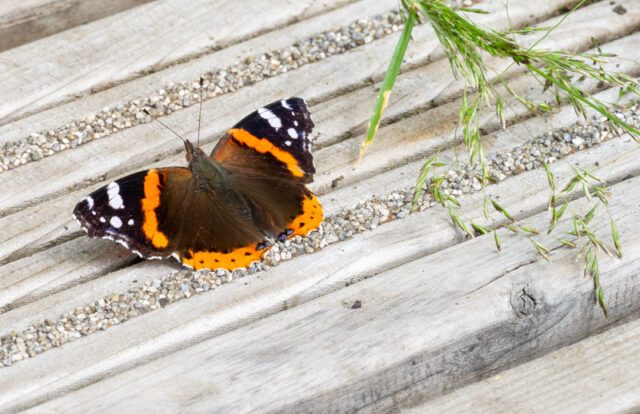 We went for the messages, Scamp did some housework, I went for a walk. That’s about it really!

We went for the messages. Scamp drove to Tesco and we collected the usual essentials but also bought some milk to put in between the wine bottles to stop them clinking.

I went for a walk in St Mo’s later in the afternoon and PoD was a Red Admiral butterfly, although a Lacewing was a close competitor, as was a little Ringlet butterfly. These words, Red Admiral, Lacewing, Ringlet and even Butterfly are ones we only use for three or four months a year in Scotland. After that the most common word is rain. Which neatly brings me to the next topic.

All the way through my walk I’d been watching the black clouds that were looming from the south. Just as I was getting to the house, I felt the first drops of rain. Scamp was just hanging out the clothes, fresh from the washing machine and was loathe to bring them in again, but resistance was futile. The rain just got heavier. She brought them in. Strangely, about a couple of hours later the rain stopped, the sun shone and it was a beautiful evening, but it was too late to risk putting the washing out again.

I used the new toy on my wrist to log my walk today and was surprised at just how accurate it was. Not only that, the amount of data it collected and sent to its masters in China will all be analysed by their top scientists to try to steal even more of my identity. I now know how many minutes and seconds it takes for me to walk a mile and how many Kcal I burn in the process (not enough says Scamp). Still it’s an amazing piece of tech. It even has a torch built in. That’s a godsend if you want to raid the drinks cupboard while Scamp is in her bed and I’m supposed to be writing the blog!

We watched poor Bandy Andy doing his best to play against his younger, fitter, but less bionic opponent.  However, it was all in vain.  Proving that old age and treachery won’t always beat youth and exuberance.

Tomorrow we have rain, hail, thunder and lightning forecast for our entertainment. I think the shorts and the tee shirts will be in the washing machine and I’ll be looking out my jeans and my rainy coat. No real plans.