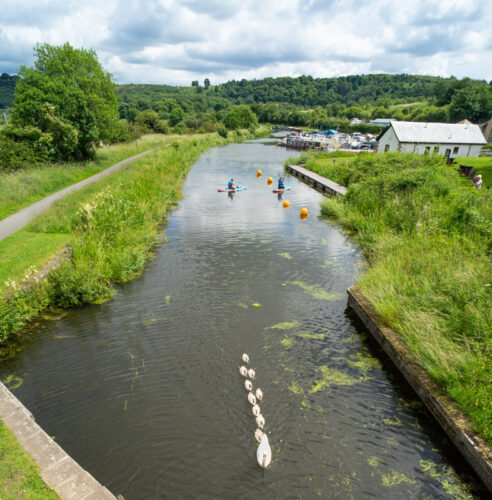 It was a lovely morning and after Scamp had hung out the washing we got our boots on and went for a walk. We stepped out the door and the rain came on!

By the time we’d gone half a mile, the rain had stopped. For the first time in what seemed like ages, we drove down to Auchinstarry, parked and went for a walk along the canal towards Twechar. I’d been a bit sensible with the camera gear and only carried the Sony, the kit lens and the 18mm. I thought a change of subject to landscape would be good, but really it was the walk that was interesting me more and I knew Scamp would enjoy a walk in the countryside, especially on a day like today.

For once we weren’t bothered too much by cyclists. Maybe that was because it was midweek and some unlucky folk would be working. Some folk have to! We did see a few people out in Canadian style canoes, a few in kayaks and one person on a paddle board. That must the the most uncomfortable way to travel on water. Kneeling and paddling. Even for the experts, standing up and paddling doesn’t make sense to me. All the discomfort of windsurfing without the feeling of speed. Not my idea of fun at all. 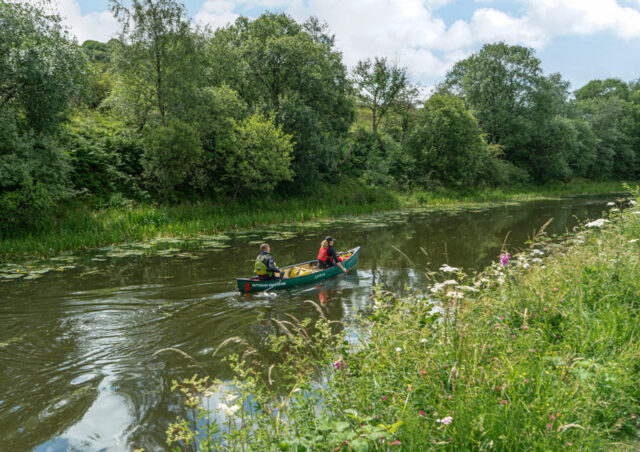 Despite my desire for some landscape photography and despite actively shunning the macro lens today, I did succumb to taking a few shots of hoverflies, but only a few. With a blue sky above and lush green fields below, thanks to the recent rain, it was landscapes that won the day, especially with the activity on the canal giving an extra interest. I did think though, watching those Canadian canoes nearing Twechar, that I could almost hear the banjos playing the theme from Deliverance!

When we were almost back at the car Scamp spotted a large flotilla of cygnets following their mother down under the Auchinstarry bridge. Nine cygnets in all. Laying all those eggs must have been an experience Mrs Swan wouldn’t want to repeat again.

Back home Scamp started making another Swiss Roll. This is the second one and she seems much happier with it than last time. This time she opted not to include the ganache. On a taste test she thought it was a little dry. I just ate mine.

The swan and its nine cygnets made PoD.

No real plans for tomorrow, although we may go somewhere we haven’t been in a long time, but it’s not Venice!