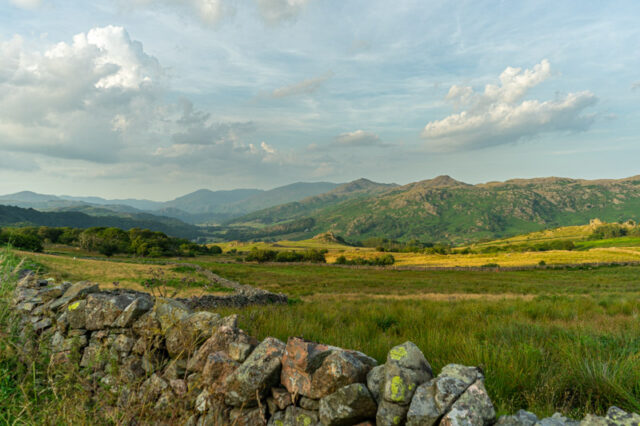 We were travelling into history today, our history.

Years ago we often drove down to the lakes for a long weekend when school permitted. Sometimes to Ambleside and sometimes Grasmere. Once when we were there we noticed an appeal for money to repair an old church in Grasmere that needed a new roof. If you paid a sum of money, can’t remember how much, you could have a paving stone engraved with your name laid on a path in a new garden near the church. We made the donation and got our stone laid, but when we went to see it, the path was only part completed. It seemed a shame to come all this way this year and not search for our stone in the garden in Grasmere. That’s where we headed today.

We knew it would be a long journey, but we hadn’t realised just how steep some of those climbs and descents would be. One descent in particular was 25%! We were just starting it when a girl on a road bike was cresting the rise, hardly out of breath. I admired her stamina getting up there. It wasn’t the most fun drive I’ve ever had and I’m sure Scamp wasn’t all that happy either, but we got there.

Grasmere was a lot busier than I remember it. Every car park seemed crammed full. However there was a notice on the exit of one that pointed to a new car park. We found it and it was nearly empty, I presume because it was on the far edge of the village. Didn’t matter, we were parked. There was a long queue to pay for a ticket, because everyone uses plastic these days and this machine didn’t seem to like that. It was rejecting cards right left and centre. I offered to try my luck with cash and four quid lighter I had my parking ticket for three hours. So, there was nothing wrong with the machine, it just didn’t like plastic!

We walked along a path beside the river and saw one of Mr Grey’s distant relatives fishing in one of the pools. The path came out just at the church and beside the church was the new garden, the Daffodil Garden, and the paving stones. The search was on.

Scamp was off like a shot and of course it was her who found the stone. Just as we remembered it. The entire path was finished now, all 3,000 of them. That’s a lot of money raised. After we’d photographed each other standing next to the stone, we left the garden to the others who were reading the names. The repairs to the church are still ongoing, but a lot has been done with the money.

We had lunch in a wee tearoom we used to sit in. Looked much the same as it did all those years ago. The couple who owned and ran it then have only recently sold it.

Scamp remembered another road home that didn’t involve climbing that 25% hill. I think it might have given the wee blue car a heart attack climbing it.

Back at the house it was an early dinner to allow JIC and Sim to get on the road. This was Neil D’s turn as chef again and it was Fried Gnocchi with Mushrooms and Beans. There was yet another group photo and a few tears when JIC and Sim took their leave. 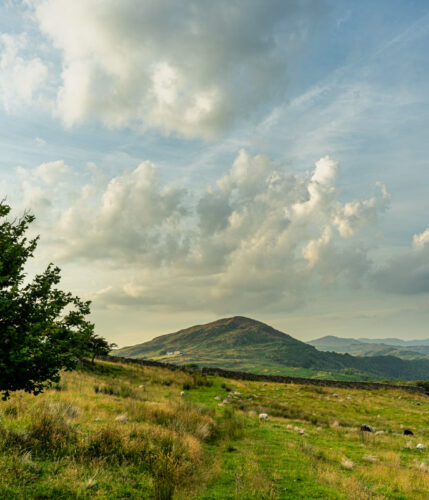 I went for a last walk along the road and got a few landscape photos in the beautiful evening light. I think they are some of my favourite photos of the week. Back at the house I tried again for some shots of the moon, but none of them worked very well. One of the landscapes became PoD.

Tomorrow is the day we all dread. Packing up and going home.