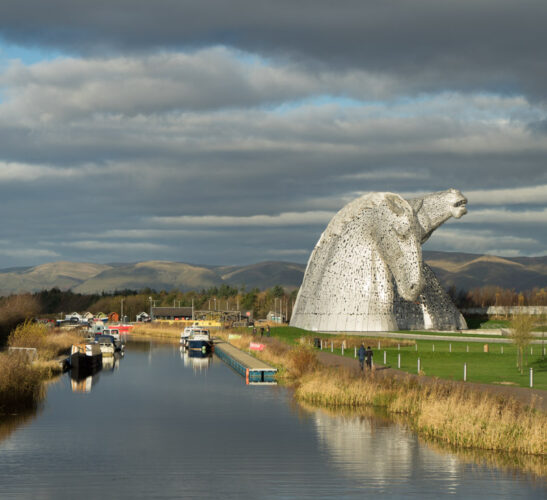 If only we could decide what to do with it.

Neither of us could decide where to go on what would be our last free day before Lockdown 2 happened. Finally Scamp said “Take me to the Kelpies” so that’s what I did. We drove to Grangemouth on a cold, day with a temperature in single digits, low single digits.

The giant horse statues looked as magnificent as ever and even better because there were no people standing around them taking selfies or pouting at their phones. We walked round them, admired them and told them just how impressive they were. They already knew, but accepted our praise in dignified silence.

We found a new path that took us round the outskirts of the sewage treatment works that was producing the awful smell. I don’t know if it was the direction the wind was blowing that was causing it, or maybe they only switch on the machinery at night in the summer to cause less offence to visitors, but it was certainly working at full blast today. The path took us along the side of the River Carron. It wasn’t the most interesting walk and we gave up after a while to walk back and go along the canal this time. It was on this path that I got PoD. Looking down the canal towards the Ochil Hills with the sun lighting up the Kelpies. It was good to be in the right place at the right time for once. We were going to have a quick coffee at the information centre, but there were a few folk waiting to get in and it was too cold to hang around. We drove home and had some “Just Soup” instead.

In the afternoon we walked down to the shops for last minute essentials for dinner (veg chilli with one of our own chillies) on the way back, Scamp offered to go straight back which allowed me half an hour to grab some more shots in St Mo’s. The Samyang was carefully supervised and although it did miss focus a couple of times, most of the shots were on target. It didn’t affect the PoD, that remained with the Kelpies.

Tonight we cleared out the boiler cupboard and now there’s garden stuff all over the house. Boiler arrives tomorrow between 7am and 9am. Engineer arrives about 9am and it’s going to be pouring by the look of the weather fairies’ report. It might be a long day.

Because of the above, we have no plans for tomorrow.