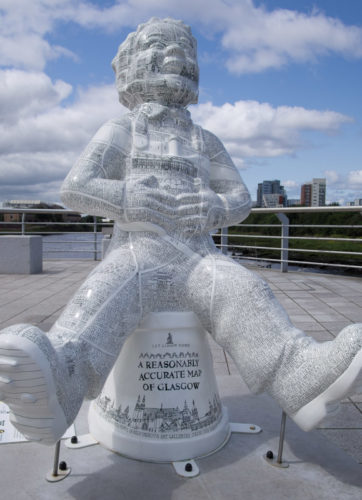 Today we’d decided to travel in to Glasgow on the bus and go to the Transport Museum on Riverside.

Got off the subway at Partick and walked along past the reconstruction that was going on by the Clyde until we came to the strange building that, from the air looks as if it’s been squeezed out of a toothpaste tube.  It looked very impressive with its glass frontage.  In the middle of July, it’s the middle of the Glasgow Beach.  Loads of weans building sand castles with pails and spaded on an area at the front of the building done up to look like a beach with tons of sand.  Everyone seemed to be having a great time, but we were itching to get in to see this wonderful new 21st century museum.

What a let down.  Yes, there were steam engines and tram cars, loads of tram cars and trolley buses too, but most of them were sealed off from the public by large perspex sheets.  This was a “Look, but don’t touch museum”.  One of the biggest selling points of the place, the revoloutionary Wall of Cars was the worst let-down.  Yes, there were a load of cars on shelves along a wall, like full size Dinky or Matchbox toys, but the problem was you couldn’t see into them.  They were too high up or too far away to see any of the detail.  The same was true for the Wall of Motorbikes.  Yes, they were there, but you could only see about two of the five layers of them. The rest were way up too high and you’d get a crick in your neck trying to see the details.  The bikes, especially seemed to be in a bit of a state.  Torn saddles and seats, suspensions not bolted to the frames.  It looked as if they’d just been placed there without any thought of restoration.  Worst of all were the cycles.  There they were, either sitting on or hanging upside down from a great circular wheel, hanging from the ceiling.  No description of what they were or why they were there.  Strangest exhibit was a Sinclair Cambridge Programmable Calculator.  I had one of those, away back in the 1980s.  At the time it was truly state of the art.  I bought it fully built and tested, but it was possible to buy it as a PCB with the components and build it yourself.  A friend of mine bought a Sinclair radio kit which was supposed to fit into a matchbox.  He got it built, but by the time he was finished it barely fitted into a suitcase.  But back to the Calculator.  Interesting though it was, what had it to do with Transport?

The building itself is striking, but there is a design theory that “Form Follow Function”.  In the case of this museum it’s more like “Function Follows Form”.  You get the feeling that they designed and built the building, then just stuffed everything they had into it.  Not impressed and wouldn’t go back.  Typical Council waste of money.

What I did get there was today’s PoD.  Probably the best, certainly the most detailed Oor Wullie I’ve seen so far.  You can get a better view on Flickr because by some miracle it managed to get into the site.  I personally think Flickr is now dead.  Today after half an hour of attempting to install the three images I’d uploaded, I got  the message that they had failed to upload.  Only to find out later that they had actually loaded successfully.  Since May, the site has been almost unusable.  Literally hundreds of complaints on the “official” help page and nothing being done about it.  I refuse to throw more money at such a failed excuse of a photo site.

Anyway, back home we got an hour in the sun in the back garden before I phoned Golden Bowl and uplifted a collection of Chicken Chop Suey & Fried Rice for Scamp and Special Chow Mein for me.  A good way to end a day in  the sun.

Tomorrow, strangely enough, we may go back to Partick again to go to a Farmers Market.