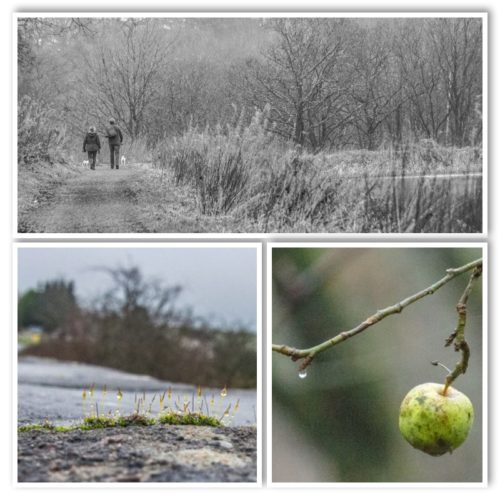 The dull day was probably what gave me the incentive to get the new sewing machine out and finally attempt to fix the pocket on a pair of jeans.

I’d ‘had a go’ at fixing it a week or so ago, but after researching the problem on the ‘net, I felt more confident that the method I’d seen would solve the problem.  Actually I’d seen two different methods, and I was going to attempt the easier and less complicated one.  That tutorial didn’t have that confidence destroying phrase “This is the tricky bit”.  I liked that.  After half an hour or so of sewing, re-threading the needle and more sewing, but without swearing, I now have a fair degree of confidence in the longevity of my repair, or Alteration as I described it recently in FB.  Hope you don’t read this Joyce.  I’d hate to disabuse you of the notion that I’ve taken up dressmaking in a professional capacity.  I’m hoping to fix a couple of pairs of jeans and also make myself a bow tie.  Little Black Dresses for Scamp may take a bit more time.  So, one down, another three to go!

I was going stir crazy, so in the afternoon I drove down to Auchinstarry and walked along the canal, through the plantation to the railway walk, then back along a different railway walk to the carpark again.  It really was a dull day.  I’d set my Nikon to a Manual exposure of 1/500th sec @ f9 and a floating ISO the other day.  That meant the D7000 calculated it would require an ISO of 25600 today.  That’s in the ‘WTF let’s have a go’ range.  You’ll get a picture, but you may not be able to see it in all the digital noise.  It produced the picture at the top and the one at the bottom right in the mosaic.  I’ve deliberately converted the top one to mono because it disguises the grain/digital-noise that the high ISO produces.  The other pic, my favourite and therefore PoD was at a much lower ISO of 4000 and taken with the Oly 5.  It was resting on the stonework of an old bridge and also had a much shorter lens, so could be relied upon to give a sharp image at a low shutter speed.  Sorry JIC, edging into technospeak again.  Sim will understand.

The bridge itself was interesting from another point of view.  All along the top edge are what I’d describe as lens shaped cuts which look like the shapes you’d get if you were sharpening a knife or a scythe.  Could that be what caused them?  I’ll photograph them the next time I’m crossing the bridge on a sunny day.  Also inscribed on the top of a stone near the middle of the bridge are the initials  ‘IW’.  They have been carved with care into the stone and both letters have serifs on them.  Often, old graffiti has these serifs and shows that care has been taken when carving them.  Intriguing.

First Sunday Social of 2017 today and I was really rusty.  Thank goodness classes start tomorrow.  We both need the exercise and the practise.

No idea what the weather is to be tomorrow.  Hopefully kinder to photographers than it’s been today.