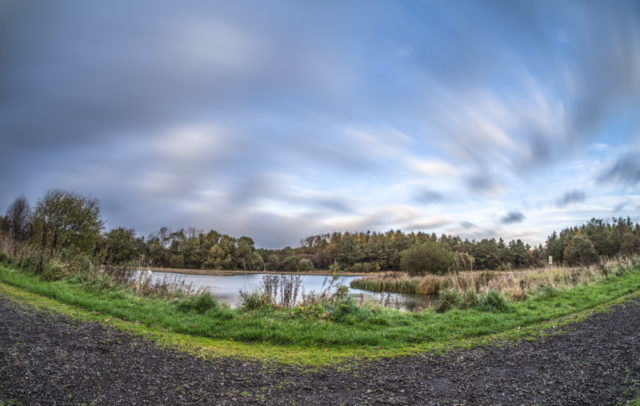 Email and printers. The most difficult and flakiest things to set up. Look at them the wrong way and they just refuse to work.

The email account I fixed this morning seems to still be working. Sent my brother an email tonight and it hasn’t bounced yet. I hate setting up email accounts and printers. They are the most hated things to get going right first time. Yes, things are getting better and the wireless printers are a dream to set up now, but even they still have hissy fits sometimes.

Today was Gems day, so after all that technology overload this morning and after getting our flu jags and after buying Tesco I packed my bag and went for a swim. I had thought of going for some exercise first, but instead I sat in the steam room for quarter of an hour, then swam for another twenty minutes. Five minutes is enough for me in the sauna thankfully now with its door back on its hinges. Then a shower and a word with old Bob who probably lives in the changing room. I’ve seen him sitting with his lunch and a flask of tea a couple of times! Still, he’s paying his money the same as us and making the most of it. He tells some tall and wonderful stories at times. David Beckham was his topic today. I get the impression he doesn’t like the man!

Came home and doodled a sketch of a concrete and wood park bench from one of my photos. It took me two tries to get it right and when it was done it looked really smart … if you ignored the ghost bench beside it which was a bit squint and out of proportion. Went out for a walk in St Mo’s to try to catch the last of the light and maybe have a look at that bench again. Never did get a look at it. Instead I found some bright red bramble leaves and disturbed a long legged spider then tried a low shot of some leaves. They’re much thicker on the ground this year, I think. Leaves that is, not spiders. Eventually settled on a ten shot view across the loch with the camera sitting on a (different) bench. The ten shots were the raw material for an idea I had. Wind was strong and gusty and the clouds were scudding across the sky. That was the reason for the 10 shots.

<Technospeak>
Came home and downloaded the images. Cleaned up the ten shots in Lightroom, then exported them to a temporary folder. Imported them from there into a ‘stack’ in Photoshop. A stack is basically one image made up of a number of layers. Ran a script called “Image Averaging Layers” in Photoshop which does a very clever blending of the layers in the stack. With that done I selected the sky and water area with the Colour Range selector tool, Inverted the selection and proceeded to delete all the ground areas except one. That one I duplicated, reset the opacity to 100%, inverted the selection again and deleted the sky from that one. Bingo. My work was done in Photoshop. Saved it off and then flattened the image. Saved it again with a different name and imported that back into Lightroom where I could do all the usual twiddly bits.
</Technospeak>
Now all that previous bit was to remind me how I did the moving sky, but the solid ground and trees. Hopefully I’ll find this some day when I’m stuck.

No dancing tonight because Jamie G is off on his travels again and also we were waiting for a call from Hazy to see how ND was. Turns out he was getting home tonight. Although his ailment was serious enough, it wasn’t as bad as initially feared. Back home in Hazy’s tender care, I’m sure he’ll be on his feet again soon. 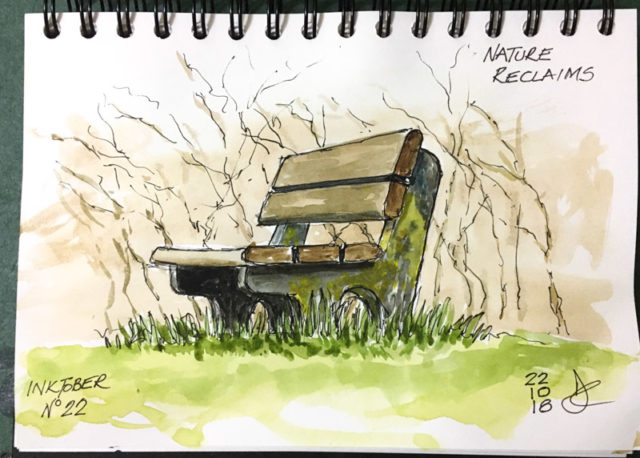 Tonight I did another Ink and Watercolour sketch of that park bench. It’s not as good as the first one. A second sketch never is in my opinion, but at least it doesn’t have a ghost bench intruding into its space.

So, basically everything is back on an even keel again, fingers crossed.

Maybe going for a curry tomorrow.