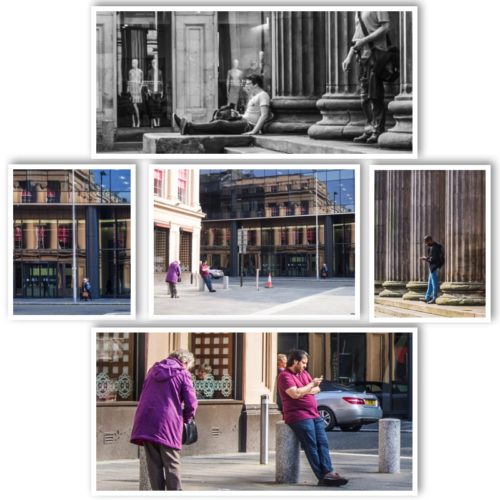 Went in to Glasgow on the bus this morning to get my locks shorn.  It was really well overdue.  There are only two barbers in the shop I go to, both of whom have different topics of conversation.  The young one is the radical who follows the Russian news channel on the Internet and says they tell fewer lies than the BBC.  Not that they are more honest, just that they tell fewer lies.  There’s a subtle difference in the semantics I think.  The older man is more careworn and sarcastic.  He’s on his third marriage I think, which probably explains my description of him.  He was in charge of remodelling my coiffure today.  Topics ranged from the usual Scottish start: The Weather to remembering Strathclyde Loch being created.  It was after we talked about how the loch used to be just a fishing pond at the south end of Motherwell that he made the startling announcement “‘course I’m not from Motherwell, I’m from Larkhall.” “You’re kidding!” I said.  We exchanged information about areas of Larky, then streets and realised that we lived about half a mile from each other.  His father had been Mr Smart the headmaster at my primary school.  Well, not exactly mine, more like my brother’s.  I had Mr Crombie as my headmaster.  We never called them ‘heidies’ then, we were much better brought up in Larky.  It was only when I went into teaching that ‘heidies’ became synonymous with authority.  We talked about places we both knew and inevitably pubs.  A normal topic of discussion in a town with the greatest number of public houses per head of population in Scotland.  I’ve been going to this barbers’ shop for more years than I care to recall and had my hair cut by this man for most of them, only to find out today the he too came from ‘The Town Behind the Wall.’  Maybe I’ll explain that sometime.  A small world indeed.

Walked out into the sunshine and went down Bucky Street and out into Exchange Square or Royal Exchange Square to give it its full title, although the royal part of the name ceased to have any meaning when Glasgow Council acquired  the Royal Bank of Scotland building which dominates it in the late ‘40s.  See, you learn stuff on this blog.  Now the grand building houses the Gallery of Modern Art (the GoMA) and is home to all human life … and a few indeterminate other forms of almost sentient beings.  “Though I never perfected the simian stroll.” could have been written for this area.  Good hunting ground for photos too.  The central photo in the above mosaic, with judicious cropping gave the photos at the bottom and the middle left.  The other two were just a couple of quick grab shots.  They took about 5 minutes total to compose and shoot.  Given half an hour here on a reasonably sunny day you could fill an SD card easily.

That was it for the photography for the day.  Wandered round the centre of town, but didn’t see anything else to tempt me into digging the camera out of my pocket.  Got the bus home and found Scamp happily digging plants out, planting others and generally tidying up the garden.  To each his and her own.

Looks like the warm weather is gone for the time being and it’s back to more seasonal temperatures for the next day or so.  I blame getting the air-con fixed!