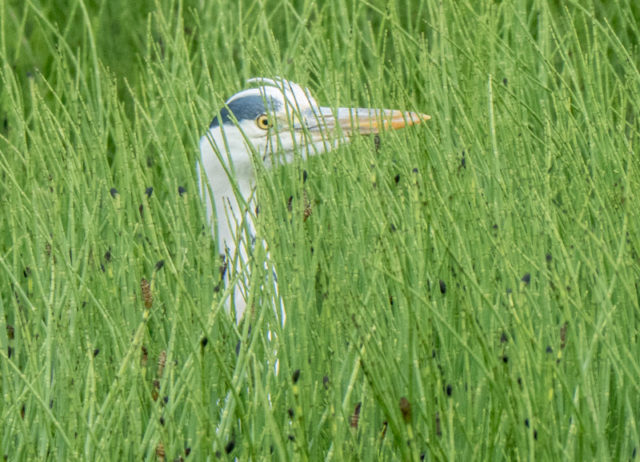 With a little bit of luck, I’ll manage to get this posted before the witching hour.

Today was dull.  Dull weather, dull feeling and dull food.  Here’s the breakdown, but first I’ll publish so I’m just in under the wire!

Ha, ha.  Managed to get it sneaked in.  Right, today the weather was dull and cloudy with the threat of rain and gale force winds later.  The rain came soon enough and with the strengthening winds, the showers came and went quickly.  I managed to get out between a couple of them and get some photos of Mr Grey playing hide ‘n’ seek among the horsetails in St Mo’s pond.  I couldn’t quite get close enough with the 45-200 on the Oly 10, but the longer lens of the Teazer worked its magic again and that gave me a PoD.

Dinner for me was Lamb Leg Steaks.  I don’t know if I overcooked them, if they should really be eaten fresh, not frozen or if they were just tough pieces of meat, but they were like eating bits of leather.  Not nice.  Just to match me, Scamp’s tuna that looked such a pretty colour was overcooked too.  We’re a pair, aren’t we?  Even the Lemon Tart we bought in the market in Sausage Roll Street on Friday was insipid tonight.  It was just a dull day.

After dinner, Scamp settled down to watch last night’s Casualty and I went upstairs to the sewing room to do the waistband of my boxer shorts kit.  I wasn’t looking forward to it, but I did eventually get it done and even managed to put the elastic through it.  Now I’ve just got the hem on the legs to do and it should be wearable. 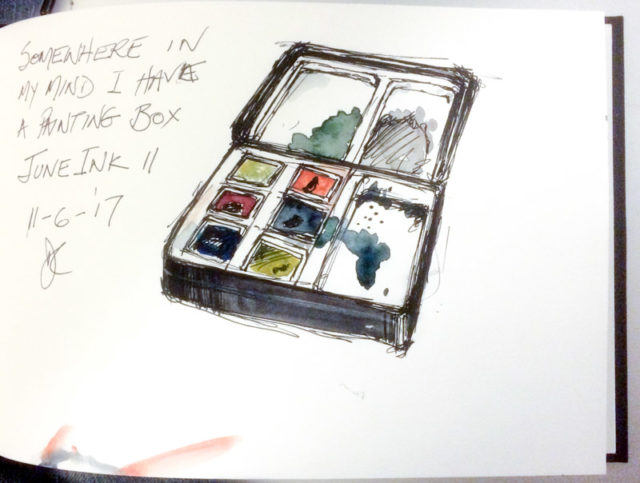 Tonight’s sketch is of my old Alwyn Crawshaw paint box.  It’s a really neat little box which holds just six colours.  Plenty for sketching and the great thing about it is that it’s about the size of a box of matches.  Do you still get matches?  You never see anyone with them nowadays.  Anyway, just to complete the drawing, the colours I used were from that self same box.

Tomorrow?  Let’s hope it will be better than today and I’ll get out somewhere other than St Mo’s.