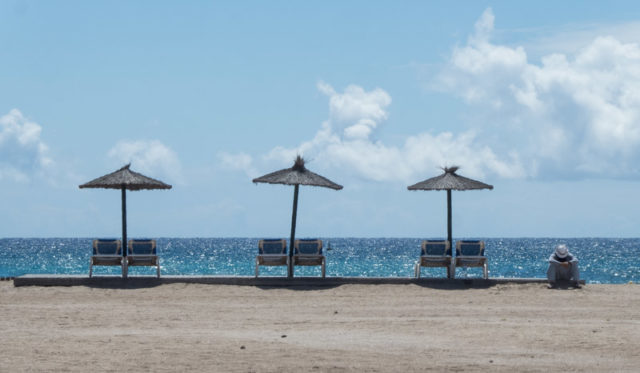 Ticking off the last few things we had to do in The Warm Place.

After breakfast we took the free bus into Caleta after a mystery tour round the various hotels around the town. We were keeping a weather eye on a big black cloud that was getting ominously close and were becoming a bit concerned that we might just need the brollies we’d left in the hotel! With that in mind it was a smart walk around to see the newly renovated Ereza Mar hotel which had been partly torn down the last time we’d been on the Windy Island. It looked really smart, but that was just the white paint and the blue roof tiles. We’d seen the holes in the blockwork of the balconies!

Walking back towards the town we felt the first spits and spots of rain. Warm rain, but rain, none the less. That gave us the opportunity to nip into the Irish bar for a pint of Guinness for me and a half pint of lager for Scamp. By the time we came out the cloud and the rain had disappeared, the streets were dry and the sky was blue once again. Walked along the sands and grabbed today’s PoD which was three seats with a view, but no takers. There is a strange dearth of visitors on the beach this year. It might be something to do with Brexit that’s keeping the Brits at home, but that wouldn’t prevent the French, Germans and Italians from grabbing some early spring warmth. Can’t quite work it out, and we’ve heard quite a few people saying the same thing. Signs of the times perhaps.

Sat on a seat beside a child’s lost toy mouse and had an ice cream, just looking out to sea. Then we said goodbye to the toy mouse and walked on to see the fish in the little river that flows out of Elba Sara. I got some photos of a bird that might be a Turnstone, but PoD remains the three seats.

Just sat by the pool in the afternoon, but the clouds were massing again and it wasn’t looking as good as it had done earlier.

Getting ready for dinner, I slipped getting out of the bath that doubles as a shower. Banged my side against the bath and staved my finger. Silly old fool. It felt reminiscent of November in Lanzarote when I woke up on the last day with a lump the size of an egg on my elbow and no knowledge of how it had happened.

Dinner wasn’t anything special to write home about, so I won’t.

Spent our last evening packing and re-packing the bags and cases. I really must review my bag packing list. With a bit of re-organising I manage to get the carry-on bag down to 4.3kg which was much better than the vastly overloaded 8kg going out.

Tomorrow it’s going to be a long day.