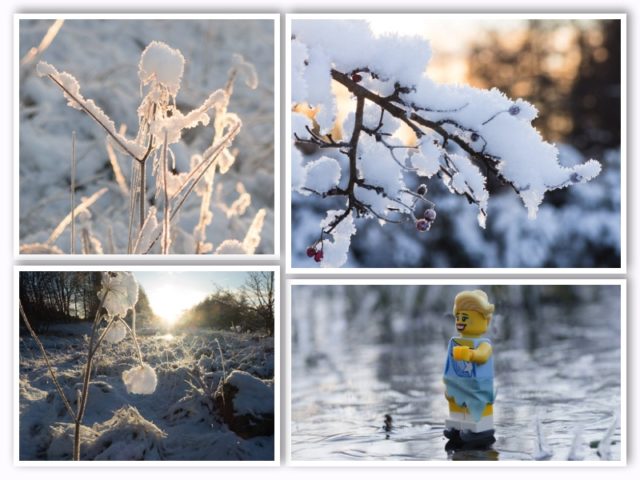 Today is Wednesday and on Wednesdays you get a 10% discount in B&Q if you’ve got a diamond card. Guess where we went today.

Another cold start to the day so we stayed in bed, in the warm and I eked out the first Book of Dust by allowing myself two chapters only before I got up and got dressed to face the day.

We drove to Stirling B&Q after finding the car under half a ton of snow. Actually, the snow was a blessing because it insulated the car from the frost that attacked the areas where the snow had melted. It didn’t take long to defrost and the screen blower is great for melting the ice on the windscreen. The thermometer in the car read -3º when we left the house, but by the time we got on to the motorway, less than 10 minutes later it had risen by 3º. That’s the effect of the ‘Cumbernauld Cloud’ as Scamp calls it. It’s a known fact that there are places where there are sharp differences in weather. My mum always talked about that happening halfway between Larkhall and Hamilton and the head of the geography department at school confirmed it. I wish I could remember what he called it. Anyway, when you enter Cumbernauld the weather always changes, and never for the better.

We browsed the lamps in Stirling but we had to crane our necks as they were all sitting on a shelf at least 2m above the floor. What a stupid place to put a floor lamp. Luckily we’d seen all the models in Bishopbriggs and we were pretty sure we knew what we wanted (AKA Scamp knew what she wanted). It was soon bought and paid for along with a packet of halogen lamps. Assembly, when we got home was a dawdle until it came to adjusting the final angle of the three decorative lamps that were attached to the pillar with Allen head screws. We’d remarked on how tiny the Allen key was when we were unpacking the bits and put it carefully to one side. Now it had moved, possibly of its own volition, because neither of us could remember moving it. I tried my set of Torx keys, but the smallest one was just one size too big. Where could that wee key be? We even lifted the new couches and looked underneath, but it wasn’t there. I wasn’t down the side of the cushions either (so strange to find no crisps or broken biscuits down there!) Finally, I lifted the instructions and there on the back was stuck the Allen key. After we used it to tighten the three screws, we carefully stuck it back on the instruction sheet so we’d remember where it is in the unlikely event of us having to adjust the lamps again. We’re still not sure if the light is too bright, but we’ll give it a week or so to settle in and then decide. As for now, we’ve got three floor lamps in the living room, each one different!

Walked round St Mo’s afterwards and tried another Weemen (or WeeWomen in this case) picture. This time it’s the ice skater and again, it became the PoD. This one was taken on a tiny wee pond far away from prying eyes, so no chance of looking a proper Charlie lying on the ground in the snow. “Honest officer I was just taking a photo of this little Lego™ lady skater.” The pic needed some adjustments outside Lightroom and I managed this in Pixelmator which is now very like Photoshop. Totally recommended for Macs everywhere.

Watched the ‘Big Hero 6’ movie tonight and it was was hilarious. Who says it’s a kids film? It was just good entertainment.