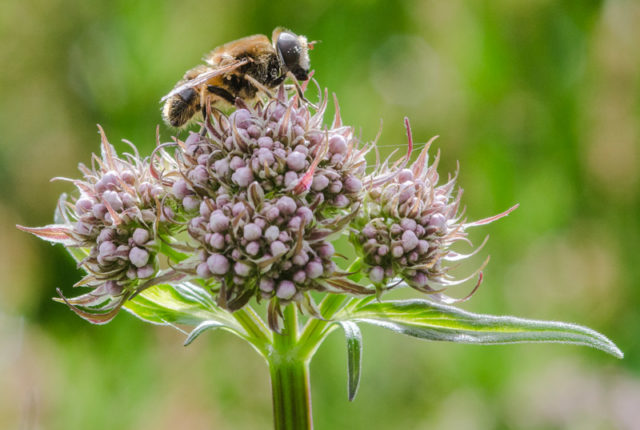 I was exhausted today, it must have been that salsa dance last night.

So tired that I slept until almost 11am. Thankfully Scamp took pity on me and let me sleep on. Woke to the news that the GSA had burned down for the second time in four years. Such a pity after all the work that’s been put into it. Thankfully the new building wasn’t touched, but the old Mac building looks like a shell now. Perhaps that’s the way it should remain.

Didn’t do very much, didn’t even have to bring the car down from where I’d parked it last night. Scamp did the honours and drove down very carefully and parked it for me.

Later in the afternoon I went for a walk to St Mo’s and got today’s PoD which is of a hover fly on a flowering weed. I just liked the shot. There’s a more arty one on Flickr if you care to visit it. It’s a leaf covered in water droplets from the torrential rain we had this morning.

Dinner was a frugal potatoes, fish fingers and spaghetti. Maybe frugal, but quite delicious. A house speciality.

That’s about it for today. Tomorrow is going to be a busy day, but hopefully with a good outcome.