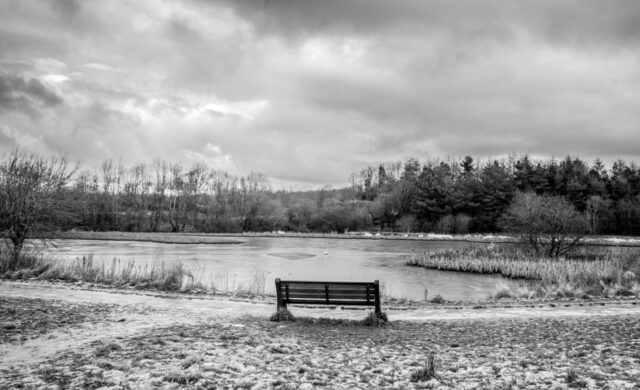 Time to get the boots and the YakTrax on and go for a walk.

Just a walk round St Mo’s, but the ice is still treacherous, even more so as there was a slight melt happening and the water was covering the ice. With care it was possible to get round and that’s what we did. Just one circuit. The ducks haven’t returned from their holiday in a warm place and it looked like the swans had become frozen to the ice that covered St Mo’s pond, but they were just pretending and got up and staggered around while we watched. The worst bit of the walk was the boardwalk, because the ice runs for the whole width of the path with no snow and therefore nowhere to get a better grip. However, again, the YakTrax proved their worth and we completed the walk intact.

I made a loaf after lunch because we needed bread or at least we would tomorrow. For speed and also because I couldn’t be bothered with the faff of hand kneading, I asked the mixer to do the hard work and it did produce a decent dough. Set it to prove and headed off to St Mo’s again for a second chance at some photos, although I reckoned I had one in the bag already.

I tried another of the daring camera on the ice shots, but the ice was melting and I could hear it creaking a bit under my boots. I could also smell the decomposing leaf mass under the ice, so it definitely wasn’t as stable as I’d have liked. Four shots and I was off onto dry land again.

Back home and an hour or so’s work and I had a mono PoD of a park bench and a colour shot of the view from the ice. The PoD came from the morning walk with Scamp and the colour shot was from the afternoon.

The bread had completed its first prove and I placed it carefully into a Banneton which is a round basket made from rattan to do the second prove. Rattan is a climbing palm that grows in Indonesia. There, you’ve learned something today. I don’t often use the banneton, but it was recommended for the long proving times necessary for sourdough bread. It certainly produced a very decorative spiral pattern on the dough which rose quite quickly in the warm living room and the bread baked beautifully. Too late for our dinner unfortunately, maybe just as well because I don’t think it would have gone too well with a fiery chicken curry. The ice cream afterwards did go well with it.

Spent an annoying hour trying unsuccessfully to get rid of some dust bunnies on my sensor. I think I ended up with more than I started off with.

Spoke to Canute tonight. We were supposed to phone him, but instead, he phoned us. Had a long talk about the ‘joys’ of grandchildren. Living with Covid and the effects it had on small retail shops. I’d forgotten that his school clothes business would now be Click ’n’ Collect. It must be so difficult for small businesses in these days of constant on – off closures. We wished him well on his operation at the end of the month.

Tonight the temperature is forecast to drop to -5ºc. We may not be going far tomorrow.