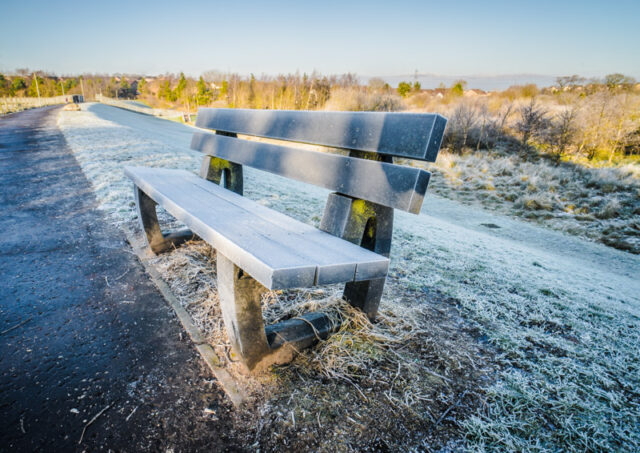 Another day for the YakTrax.

It was a lovely bright morning, but cold. Temperature was around -2ºc and we were daft enough to go out in it, and BEFORE COFFEE TOO! What were we thinking. Well, the weather machine in the house was predicting snow and it made sense to us to go out in the morning, even if it was cold. It would be much more sensible to go walking in the cold rather than in the snow. That was the logic. It made sense to me. It was bright enough to get some decent images without having to hike up the ISO too much. After struggling with dust bunnies last night, I just wanted to take some photos today.

Scamp suggested we go round Broadwood because the paths there would have more footfall and therefore be a bit cleared than the ice rink that is St Mo’s. I agreed. Broadwood would make a change too. She also suggested that it would not be a good idea to try to cross the Broadwood boardwalk which is made of plastic panels and doesn’t give you much confidence or a decent grip when it’s covered in ice. Again, I agreed. I’d agree to anything if it gets us out of the house these days and with the added benefit of a chance to take some photos.

Most of the paths were, indeed, free from ice and walking was easy. We did try one of the less travelled paths, but it was low lying and prone to flooding. Today that flood had converted to solid ice. No grip. No chance. We chose to go back the way we’d come, then extended it round Broadwood Stadium. There were a few people out walking this morning. I think most were like us, just wanting to get out somewhere in the sunshine. There’s no point in complaining about the dull days and then staying inside on the bright ones.

Back home and after lunch I was all set to make some Limoncello. As a Christmas present, Scamp had given me four lemons, a bag of sugar, a bottle of vodka and a set of instructions for making Limoncello. Today I’d decided to make it, but first I wanted to sketch and paint the two remaining lemons, the other two having succumbed to mould in this warm house. I promptly got a sketch done and started laying down washes using the strange paper pads of paint Hazy had given me for Christmas. Such strange colours which, when dry bear no resemblance to colours when wet. There’s an intense blue which looks purple with a copper sheen when dry. The warm yellow turned to quite an acid yellow on the painting. Intriguing. They mixed beautifully, so beautifully I got a bit carried away and ended up with a multicoloured mess. A most enjoyable mess, though! I’ll try again tomorrow, hopefully.

When I was setting out the two lemons for painting, I discovered that one had a big mould spot on it. It had to join the others in the bin. Luckily I’d bought some lemons at the weekend and started to pare the rind off with a potato peeler which is ideal for the task. The lemon peel went into a kilner jar and as per the instructions, I poured the bottle of vodka over them, clipped on the lid and gave it a good shake. It’s now in the drinks cupboard and has to stay there for a week before it gets its sugar added. The little bare lemons look exactly like little sheep after they’ve been shorn of their wooden coats in the summer. I may take a photo of them tomorrow, huddled together. 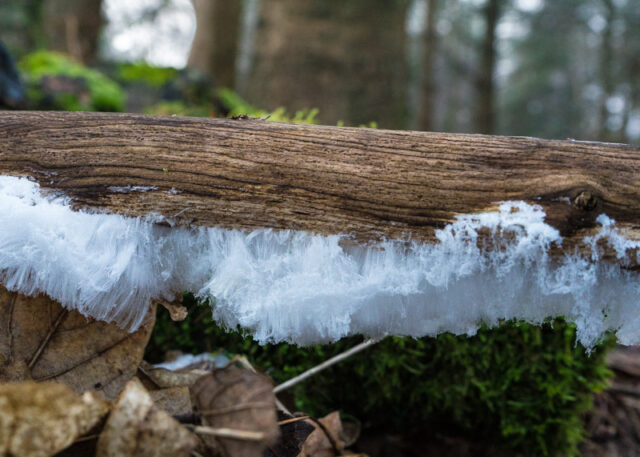 I wasn’t satisfied with the morning’s shots, so I went out again in the afternoon and got a shot of a rare form of ice called Hair Ice. I’ve only seen it once before, over a year ago, in fact it might be the same bit of wood it’s growing on. Google it and be amazed at what nature can produce. By the time I was leaving St Mo’s a freezing fog had descended and I was glad to be on my way home to a warm house.

Dinner tonight was lentil soup and Savoury Slice. Another of Sim’s recipes that Scamp’s adopted and adapted. She wasn’t happy with the results, but I thought it was fine. I was even more pleased with the coffee cake she made. Quite delicious.

The Hair Ice didn’t get PoD. Scamp liked a morning shot of the bench in its frosty coat and that became the winner.

Snow forecast for tomorrow from very early morning until early afternoon. We are having a visitor tomorrow. Hopefully I’ll be able to tell you more about it tomorrow.