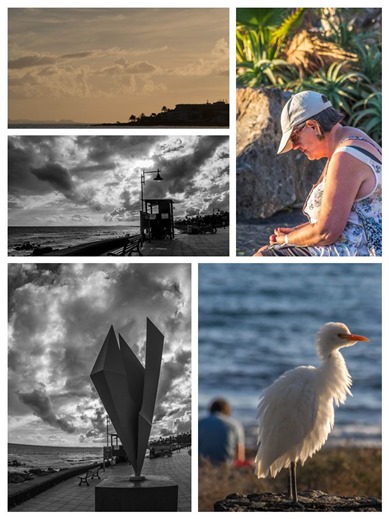 This morning we had breakfast – a lighter breakfast than yesterday and retired to the pool.

There are two pools one for each main building.  Both buildings have the same ground plan, but one has the restaurants and the reception in addition to apartments while the other is entirely apartments.  Ours is the second one.  This means that our building is a bit quieter than the other.  Unfortunately, half of our pool is currently being renovated so we don’t have the ‘swim-in’ bar which is perhaps a blessing in disguise.

We grabbed a couple of sunbeds after breakfast and we sat and read for an hour, then got a sketch done,  before I decided to find out just how cold the water was.  It was quite cold, but I was prepared for that after last year’s cool pool in Tenerife.  Once you’re in it’s not so cold, and once you come out again it’s lovely and warm.  I read a bit more while I was drying off and then went up to the room to get yesterday’s blog finished and the photos processed.  When Scamp came up she said it was starting to rain and as we watched the clouds roll in, we heard the first peal of thunder.  Oh dear, there goes the day.  We waited a while and then went for lunch which for me was a thin steak, a hamburger, spinach and potatoes.  Lovely.  By the time we came out the rain was off and the sun was out again.

After lunch we went for a walk in the direction of the airport.  For those of a binary persuasion, this was Left along the front, not Right like yesterday.  We walked on and on until we reached the airport.  Not the actual airport building, but the very end of the runway which was almost within touching distance.  The sound of the airies taking off is surprisingly loud this close up.  It was actually worse further away because the buildings shielded us from the sound of the engines as the plane thundered along the runway and it was only when it rose above them that you heard the roar.  Actually it was worse than that because for a couple of seconds the plane lifted in silence, then the roar began.  Those of a mathematical and scientific frame of mind will tell you it’s all to do with the relative difference between the speed of light and the speed of sound.  It does look strange.

While we were sitting a (French?) family decided to scramble down a steep ramp to the sand.  First the mum and wee boy tentatively edged down.  Next the dad, much braver, pushing the empty pushchair just ran down it.  The front wheels of the pushchair caught in the soft sand at the bottom and stopped dead.  Dad didn’t.  He did a clumsy sort of cartwheel before landing on the sand.  It was one of those things you see happening, but are helpless (with laughter?!) to stop.  The only injury was to the poor bloke’s dignity.

We watched a few airies taking off and then headed back with more than a few stops to rest our weary legs.  The promenade is mainly flat, but it is quite long and it takes its toll on the feet.

After dinner we went to see if the singing duet would perform any songs worth dancing to, but Scamp declared them unsuitable (both the singers and the songs, I think).  Since the dance floor was littered with weans running about while their parents watched from the audience, it was probably a good decision on safety grounds.  We retired to the waiting G&T in the room.

Sat on the balcony under the stars with a couple of G&Ts.