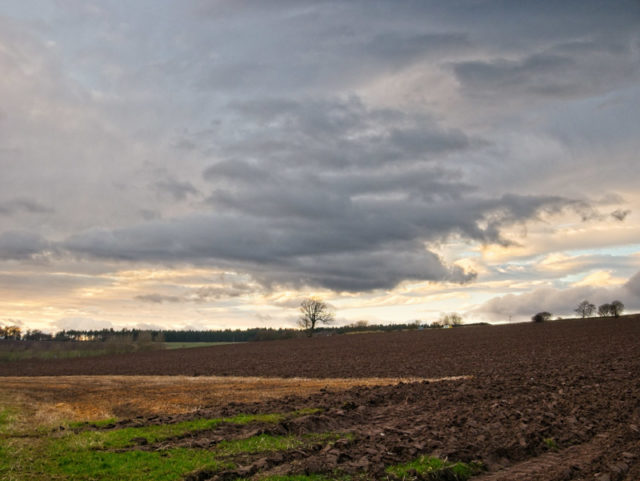 Started out fairly early to order a new pair of reading glasses.

Ended up crossing the country to get some coffee in Perth and watching some beautiful scenery pass the window.

Got the coffee and had some coffee with a panini and that was lunch sorted, but it was a cold Perth day and we headed for home after that. Stopping at a mobbed Morrison’s for petrol and also got two bags of Yorkshire Mixture, sweeties I got while we were in Wales. I was going to order them from Amazon, but someone there commented that you could get them cheaper at Morrisons and so it was!

Stopped just outside Perth to grab a photo or two. A skyscape rather than a landscape. There was certainly more colour and life in the sky than in the land. The ploughed fields just gave a bit of gravity to anchor the sky.

The nearer we got to home, the heavier the clouds became and soon their load of rain began to spill down too. It started as just sprinkles and then got more serious rain. Strangely however, the rain stopped when we got to Cumbersheugh. Dinner was fish ’n’ chips from Condorrat. Sometimes being an ex-teacher has its benefits. An FP on making up the orders got me to the front of the queue. That was nice of her. Can’t even remember your name, but thanks anyway.

Isobel phoned to check if Scamp was going to the choir concert and after checking that the taxi was available, she agreed. While she was out, I tested out my new gizmo that allows me to read ancient hard drive technology. The hard drive that interested me most was a ‘massive’ 120gb 3.5” IDE drive. That’s really old tech to most folk nowadays. Just think, you could copy all the info on that drive to an SD card now. Anyway, it had loads of memories on it and a lot of absolute rubbish too. That, in itself, paid for the gizmo.

PoD is that cloudscape from Perth

No plans for tomorrow other than John & Marion’s for dinner.