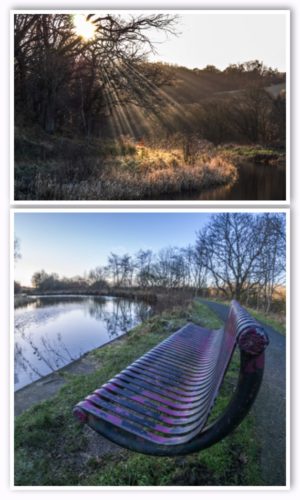 Today was Scamp’s annual Witches Christmas Dinner so it was get up, get out of bed and put your pinny on.

Scamp was first in the kitchen getting her pudding sorted. I’d taken loaf’s worth of dough out of the freezer last night and left it to defrost, then rise in the kitchen overnight. It didn’t look as if it had done much rising, but I left it on the radiator to warm up and hopefully do the business. It did rise a bit, but not as much as I’d hoped. When Scamp was finished, I turned up the oven and when it got up to temperature, I bunged it in. I still wasn’t convinced, so I made another batch of fresh dough, just in case. As it turned out, the bread was fine, so that was another load of dough in the freezer for another day. Bread done, what’s next. I started to prep the veg for the starter while Scamp sorted the table. I’d already carted the iMac upstairs away from the sticky fingers of the Witches. Prep done, there was nothing for it but to make the filo pastry nests for the quiches. It is the most fiddly stuff to work with, filo. If you so much as look at it the wrong way, it becomes desiccated and falls to pieces. However, I got the four nests made and then filled with the veg before being filled with the egg mixture. Stick it in the oven for 15 mins at the equivalent of 160ºc. They came out anaemic and liquid. Bung them in for another 5 minutes. Still not set, so turn it up a bit and bung them in again. Finally they looked ok. Had to go to Tesco for more provisions, but then it was time to make tracks before the Witches arrived.

Tried to park in the usual place in Auchinstarry, but there was a giant artic with the logo Scottish National Theatre on the side. In Auchinstarry? Surely not. Well, it was and there were luvvies everywhere as well as roadies setting up temporary shelters and there were also lockers spread all along one of the paths. Oh oh, this looked like serious theatre nonsense. Lots of money being flung at an outdoor contemporary dance and movement piece of pish. Council sponsored no doubt for the fourteen inhabitants of Auchinstarry. Just the thing you want to go to when the temperature is sub-zero and the wind is from the north. The mind boggles.

I parked at the Boathouse and left them to it then walked along the canal as far as the lone seat half way to Twechar. I didn’t sit down for fear of freezing to it, I just turned and walked across the plantation and on to the railway path, then back to the car.

Drove out to The Fort to waste some time and had a coffee and a panini there before driving back. My head still buzzing with Wizzard singing about how the Wished it could be Christmas every day. That seemed to be the only Christmas (or should that be ‘Xmas’?) song they had on the Fort’s iPod. The Party was winding down when I went in, but luckily I’d taken the iMac upstairs, so I could retire to the relative quiet of my room, process PoD which was the view along the canal with the sun streaming through the trees, and listen to some real music courtesy of Spotify.

Was told later that the quiches (remember the quiches?) hadn’t been set properly and Scamp had to rescue them by giving them a further 5 minutes. Basically the temperature in the recipe is wrong for our oven.

It was really cold today.  I don’t think the temperature rose much above zero.  When I got back to the house in the late afternoon, the rain that was frozen on the rear light cluster of the car when I went out was still frozen.

Tomorrow? Don’t know. It depends on the weather I fear.