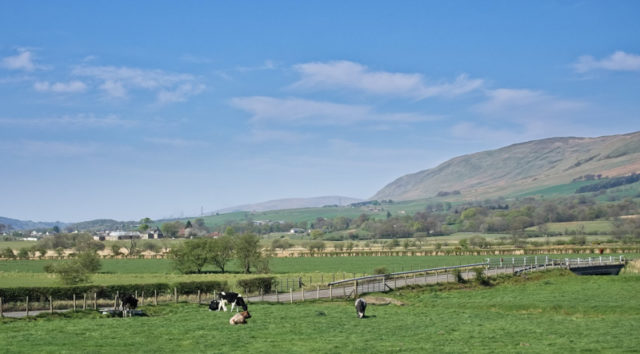 We certainly were out in the countryside early this morning.

Scamp didn’t want to miss a minute of today’s beautiful weather. That’s why we were out and walking along the Forth & Clyde canal just after 10am. It seemed today was cycling day rather than Earth Day because we must have been passed by about twenty cyclists of varying degrees of fitness and skill as we walked the canal. We reached Twechar about 11am and started to walk back using the old railway as our path. That’s where today’s PoD came from. There was just a hint of blue haze as we made our way back to Auchinstarry, but I was fairly sure my software combination of Lightroom and ON1 would bring back the true colour and it did work out well. We crossed over at the Plantation and from there back on to the canal path to The Boathouse or “HEBO HOUSE” as it seems to have renamed itself. I actually like “HEBO HOUSE”. It’s got a Nordic sound to it. I’m sure the Kilsyth folk could spin a tale that it means “House by the still waters” in Lallans dialect.

Drove home and had lunch before Scamp parked her sun bed in the garden and waited for the sun to make itself known. I started on my task for the day which was to recreate the focaccia bread we’d bought in Embra on Saturday, “The day of the Signal Failure”. It was a bit of a faff making this sloppy dough. I started out making it in the food mixer, but thought I’d like to try hand kneading it, that’s when I found out just how sloppy and slithery it really was. Finally I gave in and got the Kenwood to do the heavy lifting. Bear in mind, this bread has 140ml of good extra virgin olive oil (EVOO to those in the know), whereas my usual bread dough has about 30ml. That’s how it became so slippery. However, once it was safely ensconced in its plastic tub it didn’t look so bad and after an hour it had completed its first rise. Next task was to slide it out of the tub, cut it in two and form it into two oval shapes on the baking trays. This part was easier than I’d anticipated, in fact, the worst was now past and the two focaccia breads have now been part consumed, although we did leave a bit for tomorrow. Focaccia is a dawdle as long as you have a Kenwood Chef mixer with a dough hook to do the hard work.

Basically that was it for the day. Scamp made an excellent Spaghetti dello Chef for dinner and we scoffed it and the best part of a bottle of white wine in the garden.

Spoke to JIC tonight and watched the final of University Challenge where Embra beat St Edmund Hall and the despicable Leo “Mmmmm”.

Tomorrow we’re off to Falkirk in the morning, hopefully a sunny Falkirk. Lunch for Scamp and coffee for me in the afternoon.