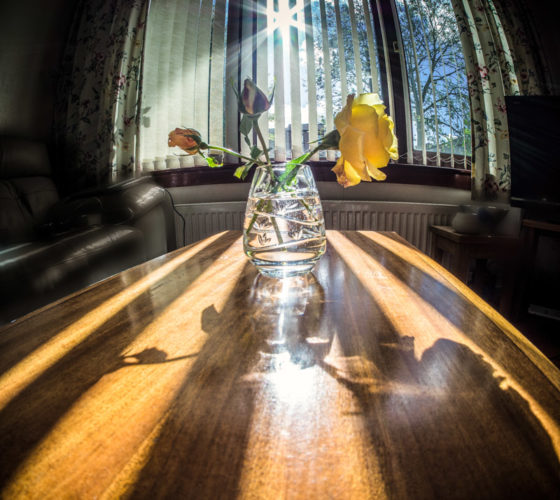 Just a short run to make sure the lungs and legs are still up to cycling after the cold virus has had its wicked way.

However, all good things must come to an end and I did eventually drag myself away from my Kindle and in to the shower, thence to go downstairs where Scamp was already off buying Tesco. Yesterday she had been cutting flowers that had been battered by Wednesday’s wind. She had put them in a vase and it was sitting on the table in the living room where the light pouring in through the vertical blinds was lighting it up and throwing wonderful shadows on the table. Now that would make a good picture I said to myself. Set up the Samyang on the Oly and grabbed a few shots from different distances and angles until I was sure I’d have something decent. At least one in the bag!

I decided this good weather wasn’t going to last, so I did what I’d committed myself to yesterday and got dressed for winter cycling. Layer upon layer of thin clothes with shorts and longs, because the temperature was only just in double figures and it was just past midday. When Scamp returned with Tesco in two shopping bags, I left for a short run. Short runs never really stay short if the traffic is light and the light is good. That’s how it was today. I tried to find some swallows because I thought I’d seen and heard some last week, but alas I may have been mistaken. So definitely no swallows this is week and this is week 39. I tried to find some photos, but try as I might, there was nothing there that interested me today. Finally I gave up and made my way home, and lunch. While I was out, Scamp took brush, sponge and hot water in hand and washed her car. Not that it needed it, eh, Scamp?

<Technospeak>
After lunch I started looking at today’s captures on Lightroom and decided that the flower shots from the morning were the best of the bunch, even if I’d forgotten to set the focus. It’s so hard to go back to a manual focus lens again! Luckily I’d set a fairly small aperture and this gave me enough DOF to make the shot look as if it was in focus. It took a bit of work in Lightroom to get the levels the way I wanted them and a bit more work in ON1 to push the background out of focus enough to concentrate the eye on the flowers. Finally I returned to LR to add a bit of warmth to the shot and Bingo it was done! PoD done!
</Technospeak>

Tomorrow we may take Big Red (that may be the Juke’s new name) out for a spin if the weather is good.