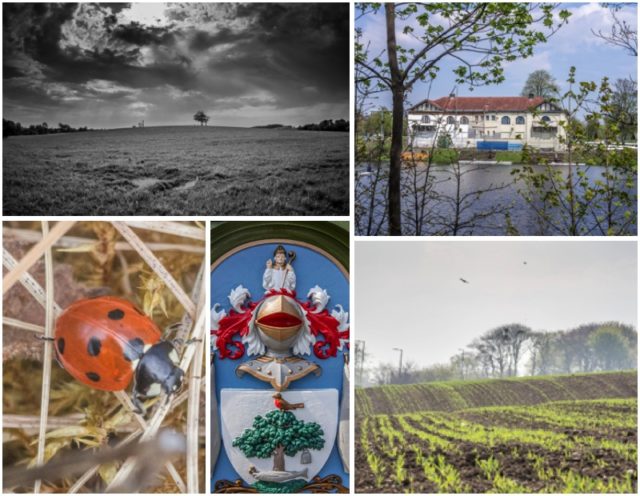 Well, today was supposed to be 18ºc and I think we met that temperature and probably exceeded it, but when we woke it didn’t look that likely. It was a slow burner.

Because the weather didn’t look as good as we had hoped, we waited before deciding that it really was going to improve. I’d intended going east, possibly to Cramond or if that was too busy, Portobello. However, our late start made a more local resort more practical. Scamp thought Glasgow Green fitted the bill, and I thought ok. Not what I’d choose, because how many other families would be thinking the exact same and there isn’t a lot of parking there. To add another factor to the mix, Celtic were playing some final or other at home at Parkhead which is on the route to The Green. After driving round the diversions to avoid the green and white crowds, I saw the last parking space at The Green disappear in front of me as the grey Astra in front of me nabbed it. Just managed to park on the roadside outside the West bar. Not perfect, but we were parked and I was beilin’. Whose idea was it to drive into Glasgow? I’ve been driving all weekend! Why do I have to do all the driving? Forgetting for the minute that Scamp had suggested The Green because I wouldn’t have to drive too far and after our walk I’d still have time to go cycling afterwards. No, the Red Mist obscures everything.

After I’d calmed down a bit, I had to admit I really enjoyed walking in the sunshine. We walked onto the suspension bridge and watched some rowers sculling with training wheels on the boat. Ok, really training floats, but that doesn’t sound so good. We had watched a white cabin cruiser heading up to the moveable weir at the Albert Bridge and when we walked down past the Western Boathouse the boat crossed the line of the weir and sailed merrily upstream. I was so taken back by this sight, my camera remained in the bag. I’ll remember it though because I’ve never seen any boat bigger than a eight man rowing scull on the river. To dispel the remainder of the red mist, I got us two Mr Whippy ice creams which were brilliant!

Just for a change, we walked across the Albert Bridge which is undergoing a fairly extensive refurbishment and not before time because this has been a rusting eyesore for a long time. That’s where the Glasgow coat of arms shot came from. I thought it was a good idea to get a photo of it before the graffiti artists got to work on it. Actually there’s more to this than meets the eye. Because I was shooting through the security barrier, I couldn’t get the whole thing in with the 20mm lens I had on, so I took two shots, one of the top and one of the bottom. Later I combined them in AutoPano. It’s not just for panoramas! After that we walked along the riverside walkway on the other side of the Clyde. Scamp and I have walked around Glasgow Green in all sorts of weather for years, probably about twenty years, we think. In all that time we have never walked along the path on the far side, the other side. It’s not as pretty a walk as the one on the green, but it gives a totally different view of the riverside. I’d never realised just how pretty the Western Boathouse was.

After the walk, it was time for lunch in the wintergarden of the People’s Palace. Roll ‘n’ Sausage for me, toast for Scamp. Then we drove back passing through the droves of ‘Sellic’ supporters.

When we got home I ‘dumped’ the photos I’d taken earlier at Glasgow Green and then got ready for cycling. Grabbed my cameras in their new sling bag and hadn’t realised that I’d left one of the SD cards on the table. Found out when I tried to take the mono shot. No card. Luckily I’d grabbed both cards, so I took the shot with the ‘5 which had the 9mm lens on and the shot from it was so much better than the one I missed with the ’10 and it’s 45mm lens. Just a short cycle today with a tail wind to start with – never a good scenario, fighting a headwind on the way back when you’re knackered. Got a photo of the ladybird in a group of aspen saplings. Actually there were two ladybirds, but when they saw one another, the both ran in opposite directions. Possibly two males or two females. The shot of the sprouting ‘baby corn’ was on the road home. I thought the perspective was interesting.

More sun forecast for tomorrow. Let’s see if it appears.