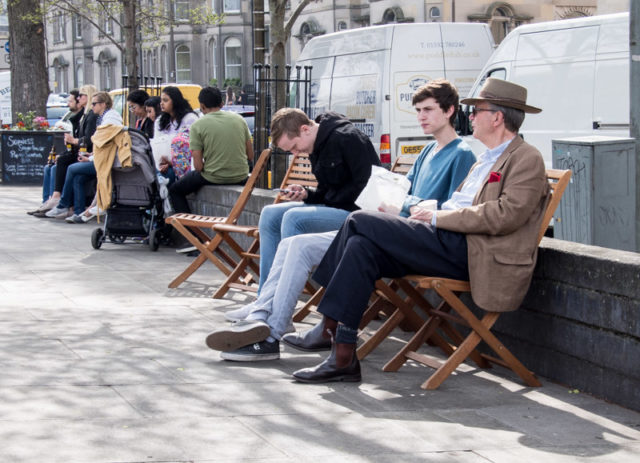 We’d said we’d go to Embra and we did.

Set off early and did our usual walk up from Haymarket station to Nero on Lothian Road then from there through the farmers market where I got a piece of Hogget Leg Steak and Scamp got a chunk of Focaccia. I also grabbed a PoD of the folk sitting in the sun.

From there we walked up to the Grassmarket and Scamp bought a wee bottle of Elderberry liqueur, although the rum liqueur they were selling tasted very nice. They didn’t have wee bottles of it, unfortunately, only big bottles. The place was mobbed. In fact Embra in general was mobbed. It was a beautiful day. Warm sunshine and very little wind which is strange for Embra because it quite often is the Windy City. I was beginning to regret wearing my leather jacket AND a jersey. One had to go, in fact, eventually both had to go.

We couldn’t decide where to go for lunch, so we headed for Princes Street Gardens via M&S where I went to get some fresh fruit while Scamp searched for the trousers she’s been looking for for the last week or so. I got the fruit, but Scamp didn’t find the trousers she wanted. However she did find a sun hat that looked good, so after some swithering about a colour, she opted for the plain white one. 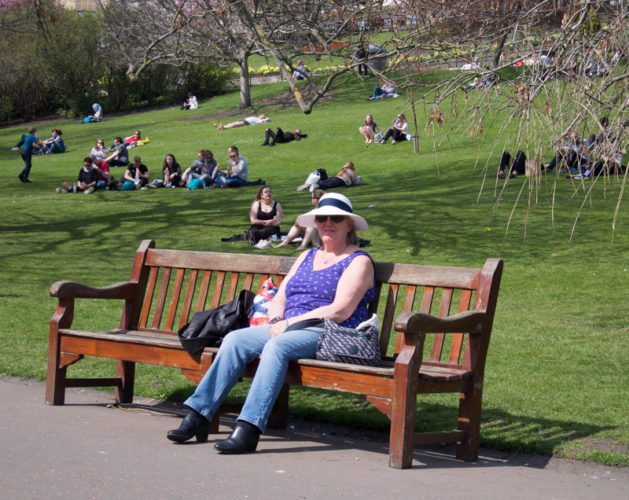 We sat in the gardens for a while eating the fruit and people watching, but decided eventually that it was far too busy in Embra and we should just head for home. Went for the 2pm train and were there in plenty of time. Sat waiting for what seemed a long time when a message came over the tannoy that with apologies, the train was cancelled. There was nothing to do but walk back to the concourse and wait for the next train which was in half an hour. Then Scamp noticed that it too was cancelled. Apparently due to a signalling fault. She suggested we get the 2.15 train which wouldn’t stop at Croy, but we could go straight to Glasgow and get another train back. After all the ticket did say “Valid via any permitted route”, so we could have gone via Inverness if we’d fancied, but we didn’t, we just wanted to get home now. Got the 2.15 which did take us all the way to Glasgow and then got the Stirling train back to Croy. A journey that should have taken us 40mins had taken 2 hours. Strangely, the 2.15 train travelled exactly the same route as the one that was cancelled because of a signalling fault. Did they magically repair the fault for the 2.15 train to pass, but knew that it would be broken again when the 2.30 train was due to leave? Maybe they should just be more honest and say “Due to staff not being available because it was such a nice day”. Anyway, we got home.

Sat in the garden and scoffed a bottle of wine that had been in the fridge since Christmas. It would be getting near it’s sell-by date anyway!

Tomorrow we may go dancing in the Record Factory.