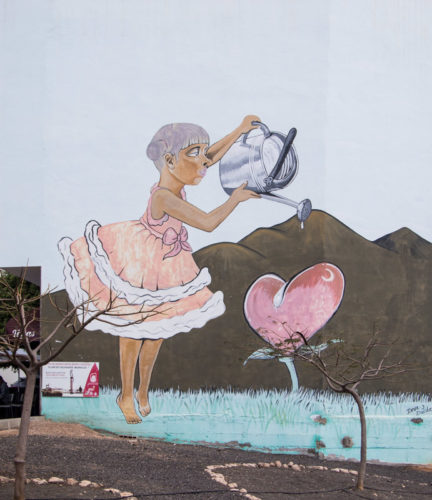 A day in the Toon

Got a bus timetable from reception for a trip into the big city – Puerto del Rosario.

Found the bus stop. I’d looked everywhere for it yesterday on my walk back from the wilderness, but there it was, just outside the Atlantico Centre. We were first on and paid our exorbitant fare of €1.45 each! Not bad for a 30 minute journey!

Wandered round the Las Rotundas shopping centre in the town. A big shopping centre built in three levels. Really quite impressive range of shops. I found a cheap electronics shop which was offering SSDs (not to be confused with STDs) for really low prices. I was tempted, but I walked away. As it happened, the only things we bought were two little €0.99 fold up shopping bags.

Outside we found the famous church with the bar. The bar isn’t actually inside the church, but it is in the grounds. An excellent way to encourage more worshippers.

On the same street there were a load of statues to various dignitaries from the past, along with another one of a goat. I couldn’t work out the significance of the goat statue. Maybe a political statement.

Lunch was further down the street in an outside cafe and was a meal-deal of a Spanish omelette and salad accompanied by a small beer (half pint) for €6.50 each. Coffee was also included in the price, but we were happy to forego that, much against the better judgement of the waitress who seemed disappointed that we were leaving without getting full value for our €6.50.  However, we weren’t totally in the shade for our meal and the sun was becoming quite hot just after midday, so we felt it would be better to be walking, rather than enjoying the extra coffee.

While we were eating we were people watching. One group of men and one group of women, sensibly sitting at tables in the shade of the cafe building. Men with their beer and cigars, women with coffee and cake. Another group at the next table to us seemed to be the Canarian version of Scamp’s ‘Witches’. All the groups were well into the ‘pensioners’ bracket.

After leaving the cafe we walked down the street, finding more statues and sculptures and also a lot of murals. One especially cleverly painted with exaggerated perspective of Time Square. I’ll hopefully put it up on Flickr once I’ve got the blogs up to date. Today’s PoD was the first mural we saw and we both liked it.

On the subject of blogs, I didn’t write this on the laptop while we were away. I tried a different method this year and made notes and sketches in a sketchbook while we were away and am typing this up at home. The book will make a nice record to look back on.

At the bottom of the street we found PdR beach and esplanade. It’s beautifully laid out and much prettier than we’d expected. Certainly worth another look some time DV. We both liked the bench seating under some shade, each bench painted with a different portrait or scene. Brightened up what could have been a dull seating area.

Back at the hotel I had too much meat for dinner and suffered from protein overload. Scamp was fine.

The show was an ABBA tribute by the in-house entertainment team. We weren’t interested and went back to the room to read.

Tomorrow we may go for a swim.