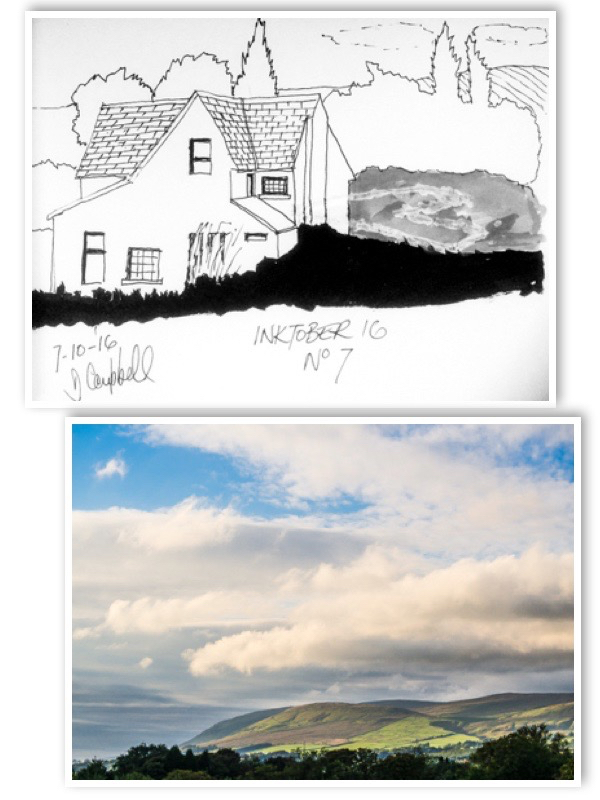 Coffee with Val and Fred today. Fred was his usual self, but for once, I think I beat him in sketches done, just beat him, but it counts. Val was just Val.

Got some tips from Fred on sketching and gave him some tips on filling up a Kindle. As usual he had some CDs for me.

In the afternoon I went for a drive looking for photos. That’s where the landscape came from. Also, I got a sketch done. Previously, I’d started, then aborted a sketch of Auchinstarry Quarry. Then I started the drawing of the house. It was meant to be a preliminary sketch, but as I worked on it, it became firmer and more detailed and finally it was the sketch. Unfortunately, it was on the same page as the aborted sketch. That’s what the Tippex covers. In future I won’t skimp on paper. It’s the cheapest part of the sketching process and it is stupid to skimp. Learn by your mistakes I was told. That said, I remember reading that only fools learn by their own mistakes, wise men by the mistakes of others. Be wise.

Scamp’s out at a Witches Glam Night. No Halloween this year, it’s been brought forward and it’s a Glam Night instead. That leaves me with a half bottle of wine, three bottles of beer and an almost full bottle of whisky. That should do for tonight! 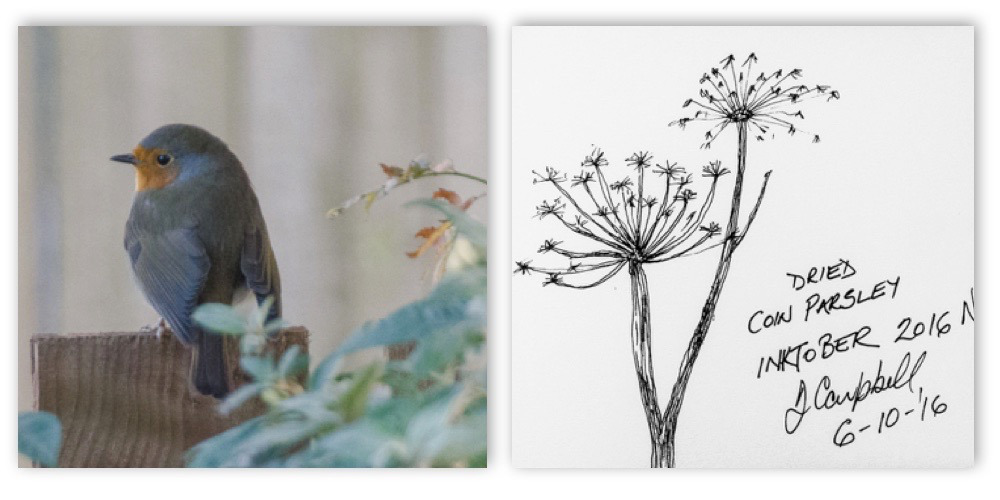 Went out for lunch today at Vecchia Bologna today. It seems that the restaurant has dropped the Vecchia part. It’s now just Restaurant Bologna. Vecchia must be too old fashioned 😉 Lunch was the usual excellent quality. I had the pate and Spaghetti del Chef. Scamp had mussels and the spaghetti. Scamp drove today, which was great because I could watch what was passing the side window instead of being totally focused on the car in front. Saw some more of these hay bales disguised as figures. Today’s was on the Carse of Stirling and they were made into a cow and a wee man. It looks like they are all made by Young Farmers. Unfortunately, I forgot I wasn’t driving and didn’t take a photo.

Today’s photo was taken much earlier in the morning when I spotted this wee robin queueing for its breakfast. I’d taken a few photos when he turned and caught the light, showing off the texture of its feathers.

Today I tore up the oil painting I’d done the other day. It just didn’t work tonally, on a colour basis or in terms of composition. So, basically it was crap. It had to go. However, it had performed its function of getting that landscape out of my head.

Which brings me to today’s sketch which is in absolute contrast to yesterday’s. Today’s was a detailed sketch with no attempt to record the image in my head and reproduce it on paper which is what blind drawing is all about. I’d originally intended to draw part of Doune Castle for today’s Inktober, but decided on something a bit simpler. Doune Castle is still on the list of things to sketch. I like buildings. N D’Ag posted an interesting YouTube video on Facebook on how to draw two point perspective and I may try that out some time.

I was a bit better organised today and got most of the heavy lifting completed early, which means I may go to be on the same day I got up … maybe.

Weather was lovely today with lots of bright sunshine. Looks like more of the same tomorrow with a little more cloud, just a little. 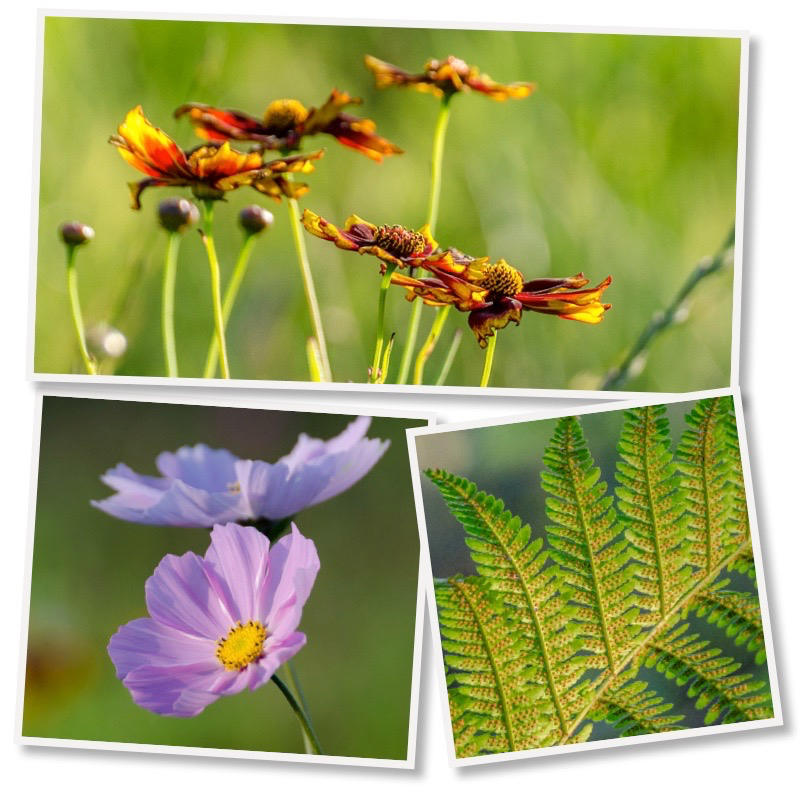 Earlier in the week there was mist in the morning and today I noticed that the leaves were turning, but I stuck to my pledge not to photograph the sugar colours and I stuck to my self imposed ban. As you can see, it was flowers that took the brunt of my photography today. It was a nice bright day with good directional light in the afternoon.

Those photos accounted for an hour in the late afternoon the rest of the time was spent farting about on computers. There’s probably a perfectly good verb for wasting your precious time trying to get the electronics inside the CPU and its various siblings to to do your bidding, but ‘farting about’ is an adequate substitute in my opinion. The less said about the detail, the better.

<Rant1>
Drove through horrendous traffic in to Glasgow tonight to get to the STUC building in reasonable time. Nearly knocked a bloke off his bike.

After losing my temper with the world, the cyclist and Scamp we made it in to the STUC building for salsa class in time, only to find almost the whole building was taken over by an LGBTI group. What the hell does the ‘I’ mean? Isnae sure? It looks like it’s like Countdown:
Consonant, consonant, consonant, consonant, oh, better have a vowel. Rearrange them into a well known phrase or saying. Failing that, decide on a use for the acronym.

Now mentally knackered after navigating through the traffic and physically knackered after two hours of salsa I’m writing the blog at 11.15pm because the person who runs the salsa class decided undemocratically to make all the classes start half an hour later. Some people are great at business, but are just not people-people, if that makes sense. After you ask folk if a change is ok with them and they tell you that “No, it isn’t”, then that’s the time to have a rethink, not just carry on regardless. That was probably rant 3.

I did manage to get a quick sketch done for Inktober 2016. It was a bit of a crash at the last minute, but it was completed. A partly blind drawing, that is you don’t look at the paper when you’re drawing, you just concentrate on the subject. I did correct myself once or twice, but for the most part it was blind drawing. It probably looks like that, but Inktober is not about skill and ability, it’s about putting pen to paper, daily.

Looking for a relaxing day tomorrow. May let the train take the strain. Hoping for even more late sunshine. 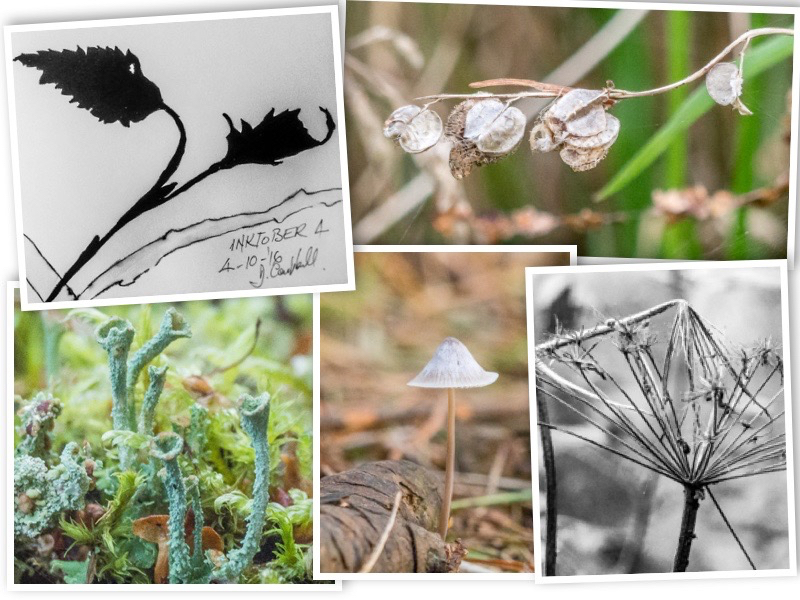 Not just brighter with sunshine, although it was a sunny day, but brighter on the computer front and in my general demeanour, as a result.

I stapled a prepped sheet of watercolour paper to my painting board, built up my easel and started getting a landscape out of my head and on to the paper through the medium of oils. It was partly successful in that, although the landscape wasn’t the best I’ve done, it was a refreshing experience working in oils again. I’m going to try the same landscape again soon in a different medium, perhaps pastel. It’s years since I last painted in pastel, probably not since I was doing my Higher Art about 25 years ago! I’ve dug the pastels out and found some pastel paper, so there’s no excuse not to get started.

Today’s photos come from a walk through St Mo’s today. The toadstool made me think of a poem by Elizabeth Fleming which might ring a few bells with two or three of my readers, although it was a long time ago, even further away than when I last used pastels! I was amazed at the detail that appeared in the little seedpods and of course the Blue Trumpets always look so unearthly. They always make me think of the moon landscape in the Clangers. Google it if you don’t know what I’m talking about. Oh yes, and there’s a shot of Mr Grey on Flickr too. The sketch is for Inktober – Google it.

Settled down to the fact that I’ve lost all the rules I made up in the Hazel app, and realised that most of them were redundant now. I’ve re-written the ones I use the most and will write more as I feel the need. I’ll also back the bloody things up this time. Lesson Learned!

That’s about it for today. A beautiful bright day, if a trifle cold. A cold trifle would be nice too!