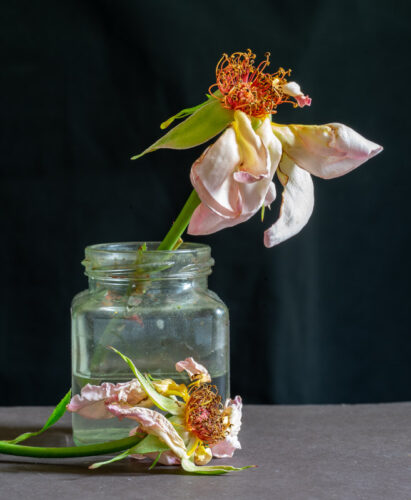 A dull, cold day the temperature didn’t rise much above 14º.

What a difference a day makes. Yesterday was a beautiful sunny, but windy day. Today was cold, windy and a bit dull, but you can’t win them all which might be the Scotland team’s motto having failed to win their first game in the Euros.

Annette visited today and keys changed hands. I’ll say no more than that. While Scamp and her were deep in conversation I cut two fading roses, took them upstairs and set up a small tabletop studio to photograph them before they completely fell apart. For the first time ever, I think, I used the MBP as a monitor and shot the pictures tethered to the Sony. Once you get past the restrictions of using the poor Sony software, the results were really good. The whole process could have been a lot easier if a bit of thought and some better programming had been put in place by Sony, but at least it worked and was an improvement over the phone app I’d used before. One of the rose photos got PoD. Annette was leaving just as I was finishing. It was strange to see her red Juke sitting just up the hill from our blue Micra. I still miss the Juke a bit, but I prefer the better mpg of the Micra.

Lunch was another quiche with the same ingredients, smoked salmon and broccoli, as last time, but this time we used a tortilla wrap for the base. So much simpler. It was voted a success. Worth doing again but with an extra egg next time.

I’d bought myself a pair of walking trousers last week and like the previous pair I got last year, they were too long. Tonight I got the sewing machine out tonight and folded up the hem on the legs and sewed it. I thought the poor machine was going to have a heart attack as it hammered away at the heavy cotton which was triple thickness and even thicker at the seams. However it seemed come through it unscathed. Just to be sure I did a wee test piece after I was finished both legs and it sounded fine again.

I’m still thinking about formatting the disk on the iMac and re-installing the OS. Too many little quirks are appearing. I think there is a lot of junk on the OS and also in the unused programs that is just taking up space. Tonight I think I’ve discovered how to copy off the Keychain and then re-install it. That would be very useful.
The foregoing is really just for my benefit.

Tomorrow we’re waiting for the post. We may go out for a spin.