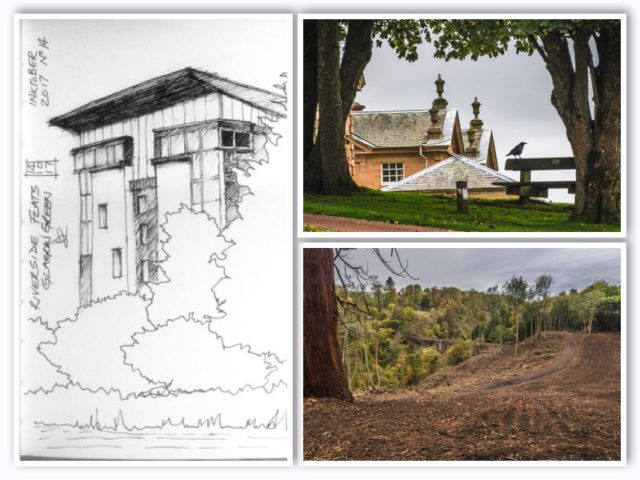 The day started well. The wee tickle in the back of my throat had gone. Partly this was due to me taking a fairly big slug of Benylin and partly due to me taking an extra dose of vitamin C tablets with some honey, both just before I went to bed. I don’t know if the Benylin helped with the cough, but it did certainly get me to sleep double quick and I had the longest and best sleep I’ve had in weeks.

That was the good news. The weather outside was grim. When I woke it was light and there was just the hint of some sun, but that gradually faded to the usual grey. We couldn’t decide what to do and I think we were both waiting for the weather to improve. It didn’t and as we had nowhere we needed to be and nothing we needed to do, we went out of a run to that awkwardly named Chatelherault. Thank goodness for Ctrl V. Scamp chose the top route this time and I suggested we walk to the Green Bridge. It’s many, many years since I’ve been to the Green Bridge at Maryhoses. Unfortunately, we hadn’t brought the walking poles with us and the path down the hill to the river was really steep and slippery with muck. Scamp decided she wasn’t going to risk it and I agreed, so we walked back along the path to Chatelherault and had coffee and a pineapple cake (pure indulgence) for our efforts.

I got a couple of photos at Chatelherault and then we came home.

I’ve got a 2TB desktop HD. It’s got two partitions (Don’t worry. Not too much technospeak) Tonight I planned to use the PC to copy files from one partition to the other to free up space to make a backup drive for the iMac. I set the PC to copy the 300GB of photos (copies, of course). It reported that it would take about 4 hours. That was ok, I used a program that would allow ‘unattended copying’. To do that you just specify what to do on certain occasions and the program does the rest. No problem then? After about two hours I went to check how it was progressing, only to find that Windows 10 had installed an update and restarted the machine, halting the copying and switching off the drive in the process. The upshot is that the drive is now unreadable. I read so many tirades on the net about Windows being unmanageable these days since Windows 10 has taken over, but until tonight I didn’t really believe them. I do now. The iMac may have cost a lot of money and I know that Apple too has its flaws, but tonight’s escapade was pure vandalism by a company that expects us to trust them. I am now a fully paid up Windows Hater.

Tonight’s sketch is of riverside apartments beside the River Clyde at Glasgow Green. It was done from a photo, but that’s ok by me. It’s done and on time.

I’m going to bed now to prevent me from having another rant about Windows fuckin’ Updates.