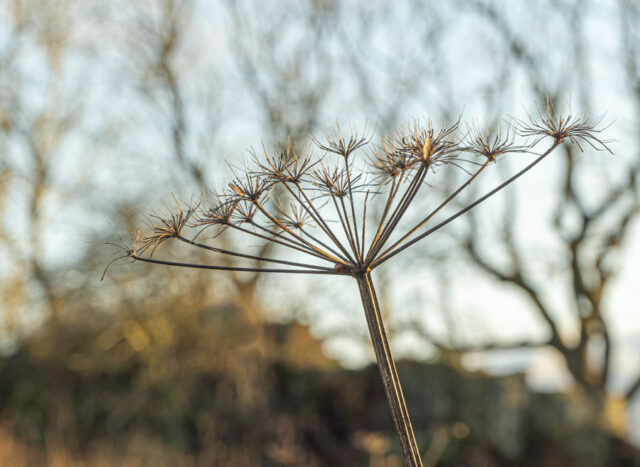 Today we continued with the cooking and baking for tonight’s dinner.

Started early, making the dough for the bread. It was to be a full size loaf, and to save time (and effort), I made it in the mixer. That did most of the work, but the dough still needed more flour to be worked in because it was too wet. Actually I’d have been better making it by hand because you can feel whether the dough is too stiff or too wet and make adjustments as you go. Eventually I was happy with it and left it to prove.

By then it was nearly lunchtime. After that I took some time to get the ingredients organised for the main course. Rice weighed out, onions chopped and likewise cabbage. Scamp already had the fish defrosting.

With the prep done, I went for a walk down to the shops to get some beer for the visitors. I took the camera with me, of course but nothing really caught my eye. My favourite shot, and PoD was of the afternoon light illuminating a hogweed seed head. It wasn’t until I had the shot home and was inspecting it in Lightroom that I noticed the little ladybird tucked neatly in between the branches.

Beer bought, I headed home and helped set up the table. My ‘help’ really only meant I helped pull the table out and lay the table cloth. Then it was time to put the bread in the oven. It had risen well. It was when I was turning it out of the wicker basket on to the baking tray the whole thing deflated. A flat as a pancake loaf is not what I wanted for tonight. In a fit of pique, I bunged it in the bin and started again. If I’d thought about it, I’d have knocked the air out of it completely and set it for another prove. I didn’t stop to think. Too hasty sometimes, that’s me. Anyway, I made a smaller quantity, hand kneaded it this time and set it to prove. That gave me time for a coffee and to make a start on today’s Sudoku.

This time the dough rose much better than last and it went into the oven to bake, it had fallen slightly, but reinflated quickly in the hot oven. It came out fine. I’d just started the main course when the visitors arrived. I left Scamp to do the entertaining while I fried the onions and the rice and veg then added the fish stock and bunged everything into the oven which was just at the right temperature to bake the risotto for 20mins. That gave me a chance to have a beer with Crawford and chat to Nancy. After some time I checked the timer, only to find that I’d set it, but forgotten to start it! I needn’t have worried, my inbuilt clock and Scamp’s hint about “How’s the risotto doing?” saved the day. Basically it all worked fine. Later when Scamp and I discussed the day, we agreed that the combination of a heavy soup and far too much risotto had made the dinner a bit heavy. Her Sticky Toffee pudding and my second loaf had been the stars of the show.

It was early morning before we got to bed after half the dishes had completed their cycle in the dish washer and that’s why this is another catch-up. First one for a while.

Tomorrow we need to be up and out early for the first dance class for a long time.