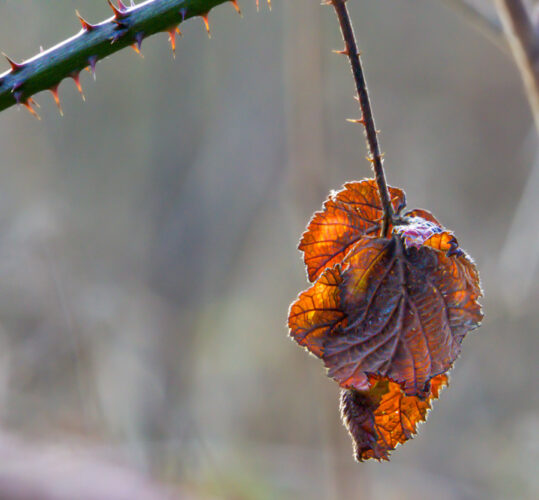 The snow had almost gone when we woke today.

It was raining and the rain seemed to persist all day. On and off with little respite from it. We didn’t need to go out anywhere, so we didn’t. But that’s not true, we did go out, making the excuse that we needed milk, but that was in the afternoon. We just sat and read the news in the morning.

Eventually it seemed like a good idea, after lunch to go for a walk, more for the exercise than to get photos or to buy some milk. Two circuits of St Mo’s provided enough photographic evidence for today’s PoD which is an amalgam of two photos. Most of the leaf was sharp and detailed in the first shot, but the little curl at the top left of the leaf was sharper in the second. I used Affinity Photo, a much maligned, but very useful photo app to carefully glue the two images together to get the best of both world. Then it was back to Photoshop to deal with the ‘grain like golfballs’ that the process creates. There is no point in having two spectacularly useful apps and relying only on one. An Ansel Adams quote springs to mind: “You don’t take a photograph, you make it.”

After walking round St Mo’s pond twice, once clockwise and once anti-clockwise, we continued down to the shops just as the rain started, and split up. Scamp to go to M&S while I went to Home Bargains. We met up again as the rain was tailing off and walked home.

Dinner tonight, we’d agreed would be courtesy of Golden Bowl. One Chicken Chop Suey with Fried Rice and one Special Chow Mein. I walked over to Condorrat to get them around 5pm and the paths were treacherous. Neither gritted nor snowploughed, they were one long sheet of ice. Luckily the grass on the verges was walkable with care, but there were a few dicey moments. I should really have worn my Yak Trax.

We watched some silly TV, including the first (and hopefully last) Masked Singer. Death in Paradise, after that was a serious manhunt by comparison.

Tomorrow it looks like more rain is forecast in the morning but with the hopes of a brighter and drier afternoon.