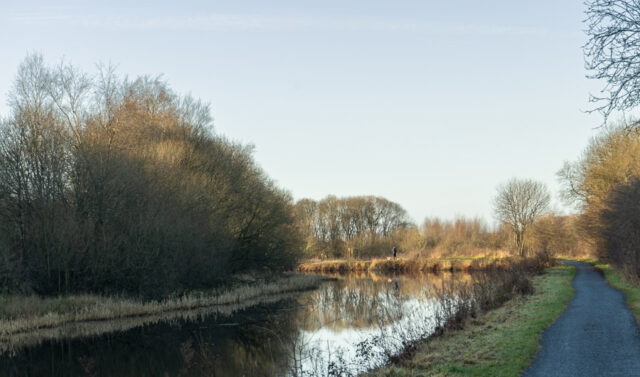 No dull skies today, only blue and the big white shiny thing was up in that sky.

I was so glad to see the hill basking in the warm glow of the morning sun when I got up. What a difference a day makes. We just had to go out and enjoy that sunshine. We drove down to Auchinstarry and found a space to park at the quarry. From there we walked along the old mineral line path as far as Twechar. On the way there we stopped to let four cyclists past. Further on we bumped into a wee older man pushing his bike up the hill. He told us it wasn’t a true electric bike, it was an electric assist bike which means that if you stop pedalling, the motor stops too. He seemed to be enjoying the freedom of the bike. I’m not sure I’m ready for that yet, although it’s a long time since I last took the Dewdrop out. By that time we were at the halfway point of the walk. I’d taken a few photos, but not a lot.

We crossed the road and followed the towpath back to Auchinstarry. On the way we passed a few folk out walking in the morning sunshine. A lot more photos were taken and with no wind, the reflections in the water were excellent. Most of the bikes that passed, and there were lots, were serious road bikes or hybrids, but there were a few electric bikes too. We even met the wee man on his assist bike. He seemed to be making good time, far better time than us. Back at Auchinstarry the car park had filled up quite significantly since we left the car. Every space was taken and cars were parked along the edge of the climbing wall of the quarryside too. We went to Kilsyth after that to get some potatoes for dinner and a bottle of gin for me. `

Back home and after lunch I started making some bread. Well, the mixer started making some bread and I just watched it. Then it was time to start reorganising the wires and cables behind the TV. We had discussed this last night and come to the conclusion that we could happily do without the DVD player and, since we now had a much neater TiVo box, we should try to build a pedestal for it that would hide the mass of cables that crowd into the space behind the TV. After photographing the back of the TiVo I disconnected the cables, removed the box and the, now redundant, DVD player. The next thing to do was to decide what cables were staying and what could go. Then it was time to plug everything back into the TiVo using the photo as a reference and hope it worked again. It did. For now the TiVo is sitting on a low stepping stool, but we’ve a plan to make a low pedestal from a piece of pine that has been wasting its time in a cupboard upstairs. The DVD player will go to the skip, maybe as early as tomorrow.

Next task was to get my lamb shoulder ready for the oven. Just for my reference, here is what I did:
Heat the oven to Gas 4.
Pan fry the rolled lamb shoulder
Tuck some rosemary into the meat and secure it under the string
Season with salt and pepper
Put in a roasting tray and cover with tinfoil
Cook for 1 hour
Check, then return to the oven for another hour.
Allow to cook for about 30 mins in a warm place.

This is for a piece of meat 600g approx.

PoD was a shot of a bloke walking his dog along the towpath of the canal.

Lamb was delicious. Scamp’s scallops were a disappointment. Bread looks good, although we haven’t tasted it yet

Spoke to Jamie in the evening and heard all about the extra costs in getting the house the way you want it and how the cost of every repair seems to have three zeros after the first number!

Tomorrow more sun and blue sky predicted. Another walk is on the cards I hope.